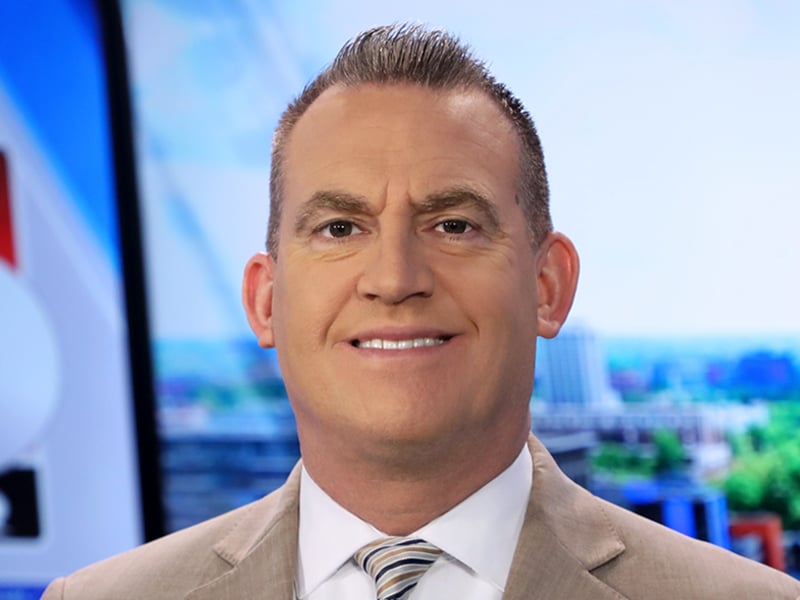 T.G. Shuck joined ABC 36 as Chief Meteorologist in April 2022. A Lexington native, T.G. graduated from Lafayette High School before attending Georgetown College where he earned a B.A in Communications. He was an NAIA All-American kicker for the Tigers and was inducted into the Georgetown College Athletics Hall of Fame in 2009. He earned his Certificate of Broadcast Meteorology from Mississippi State University.
T.G. is a four-time NATAS Ohio Valley Chapter Regional Emmy Award winner for “Best Weather Anchor” (2007 & 2010), “Best Weathercast” (2007), and “Best News Anchor” (2007) for his involvement in the coverage of “The Crash of Comair Flight 5191” at Bluegrass Airport in Lexington. Between 2006 and 2010, he was selected “Best T.V. Weather Anchor” by the Kentucky Associated Press for five years in a row.
He was one of the first television meteorologists in Kentucky to acquire the prestigious Certified Broadcast Meteorologist (CBM) seal from the American Meteorological Society in 2005. He is currently the only Chief Meteorologist in the Lexington TV market to hold this designation.
Shuck began his on-air career in 1996 as a weekend meteorologist, before becoming morning and noon meteorologist in 1998. He was named Chief Meteorologist at WKYT-TV in September 2001. In early 2012, he took a break from the industry to spend more time with his family and to support his three daughters’ acting careers on Broadway in New York City. He returned to Kentucky in 2016 and spent more than 5 years as morning and noon meteorologist at WHAS-TV in Louisville before joining WTVQ as Chief Meteorologist.
The weather has been a lifelong love for him since he was born and reared in Lexington. When the “Super Outbreak” of tornadoes struck on April 3-4, 1974, T.G.’s interest in the weather took on a whole new meaning. “As a frightened 5-year-old child just days short of my 6th birthday, this event fueled my desire to learn more about the atmosphere and how it works”.
“As a native Lexingtonian and Kentuckian, I am deeply rooted in the Commonwealth. I’m ecstatic to be here at WTVQ and back home in Lexington. I look forward to serving the people of Central and Eastern Kentucky once again and giving them the most accurate, up-to-date forecast each day just like I did before in this region for 16 years.” Shuck said.
In his spare time, T.G. enjoys participating in a variety of sports. He enjoys jogging several times a week and attempts to participate in at least one road race each year. College football, basketball, and professional football are T.G.’s favorite sports. He’s a big fan of U.K. Sports. His 3 teenage daughters Sydney, Brooklyn, and Raleigh are his pride and joy. You can find T.G. on Facebook (T.G. Shuck), Twitter (@TGWeather) and on Instagram (tgshuck). Feel free to email him any weather related pictures at tgshuck@wtvq.com.

It’s been a wonderful weather of dry and warm weather across Central and Eastern Kentucky but changes are not far off.

After a brief break, more rain and storms on the way into the late week

A warm weekend ahead as we dodge a few scattered storms

Mainly dry to finish out the week despite clouds rolling in