After a nice start to the week across Central and Eastern Kentucky with some early sunshine followed by some higher clouds late Monday, the focus now shifts to the potential for a few strong to severe storms Tuesday as an area of low pressure spins by to our north and a cold front sweeps through from the west. 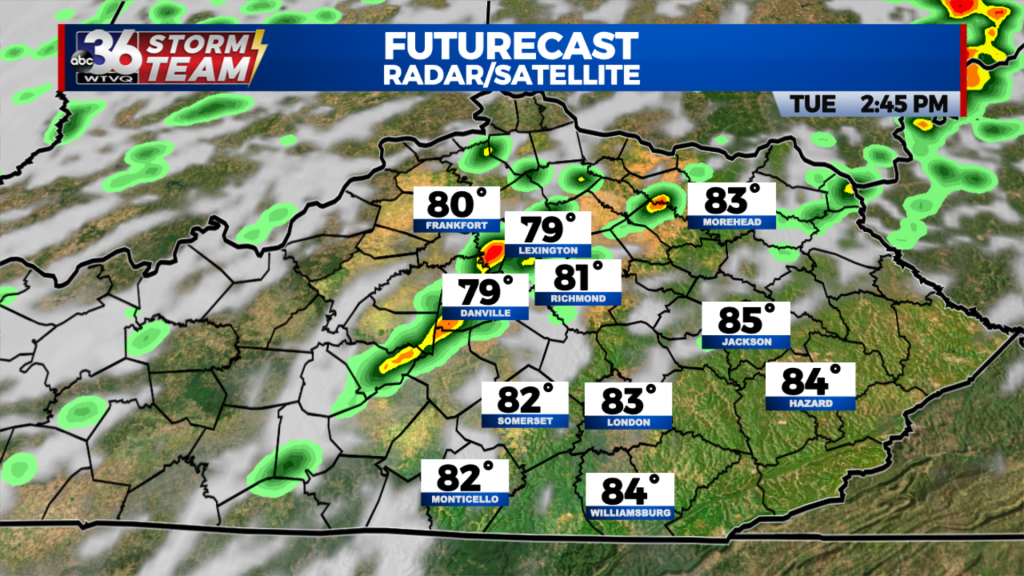 The Storm Prediction Center has much of Central and Northern Kentucky in a Level 2 (out of 5) risk for severe weather, especially Tuesday afternoon and evening. While all modes of severe weather are on the table, the biggest concern is for damaging winds as a line of storms develops on the nose of the front. As is typically the case, an isolated tornado spin-up can’t be ruled out, especially with the spin in the atmosphere thanks to low pressure passing through the Ohio Valley. Farther south and east, the severe chances ramp down to Level 1 with those areas being farther away from the best dynamics and with a later arrival of the storms. Just keep an eye on the weather and stay with ABC36 for the latest through the day on Tuesday. 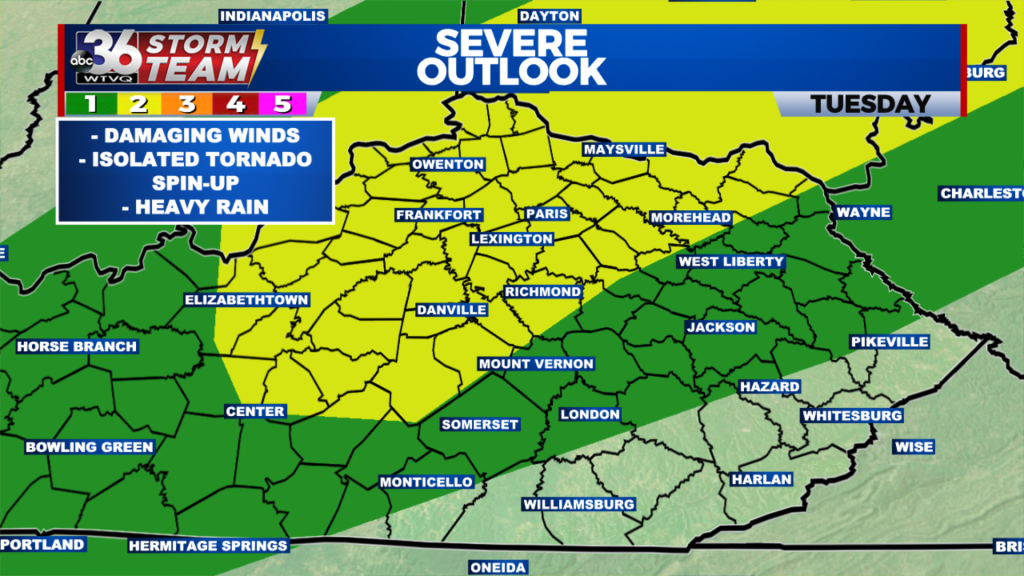 Once the cold front passes through we are set-up with a mild and dry mid-week across the region. With a mix of clouds and sunshine, temperatures should be pleasant Wednesday with highs into the upper 60s. Much of Thursday should be dry as well before our next storm system makes a run at the Ohio Valley late Thursday. Temperatures should recover a bit with highs in the mid-70s. 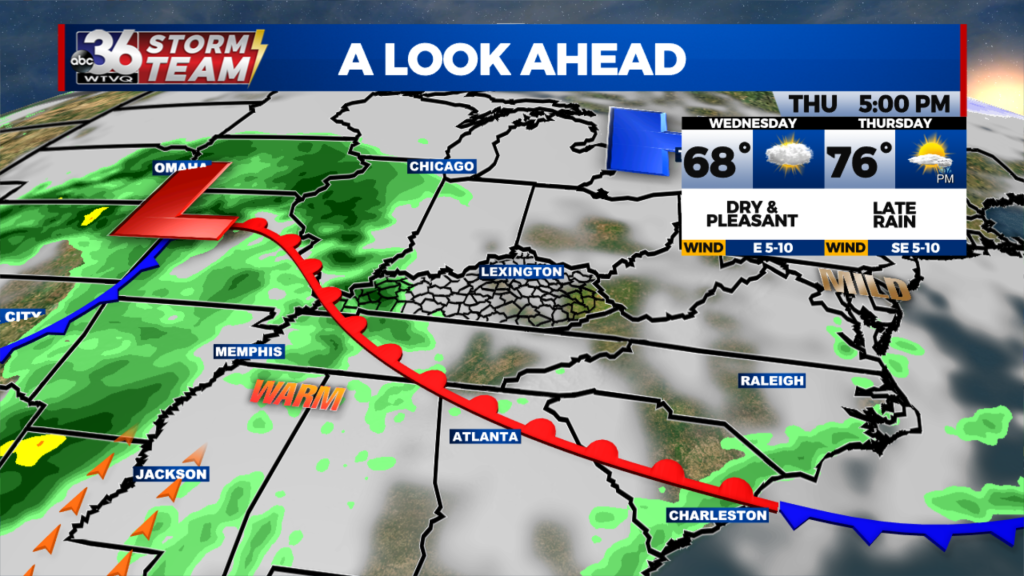 Timing is everything with the weather this time of the year, and with Oaks and Derby approaching, it appears that Mother Nature may try to spoil the festivities yet again this year. As yet another are of low pressure loves through the region, Oaks Day looks wet and stormy across the entire area, including Churchill Downs in Louisville so it may be an off track for the Oaks. 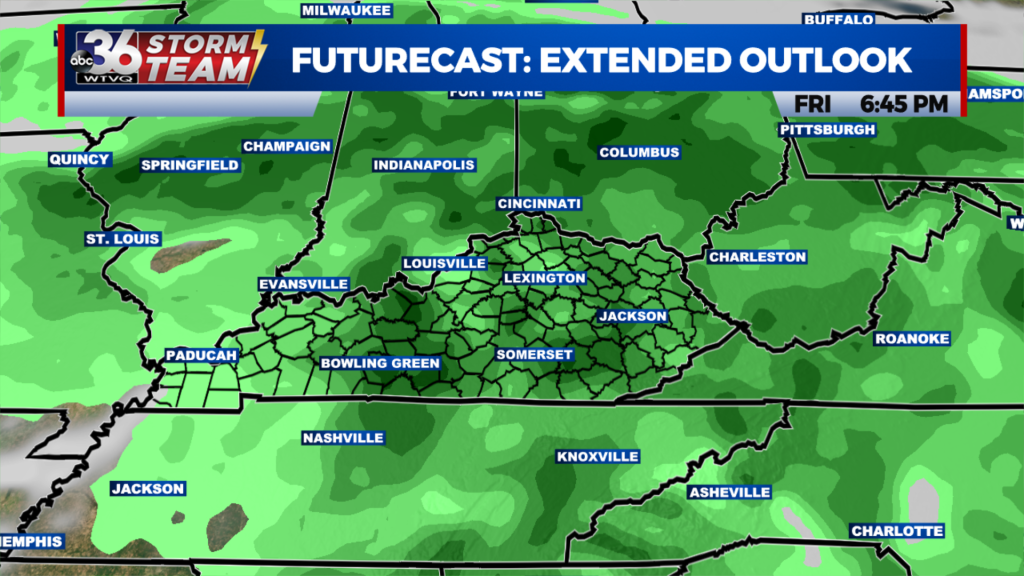 The model data isn’t totally in sync yet with how quickly the system moves out heading into Derby Day. The graphic below shows the WORST case scenario, which has some upper level energy lingering behind the main low on Saturday, thus keeping light rain chances around for Derby Day. Some of the of the other data has morning showers tapering off as Derby Day rolls on with dry conditions by the time the starting gates open early Saturday evening. Things can and usually do change, especially several days out so we’ll keep an eye on it! 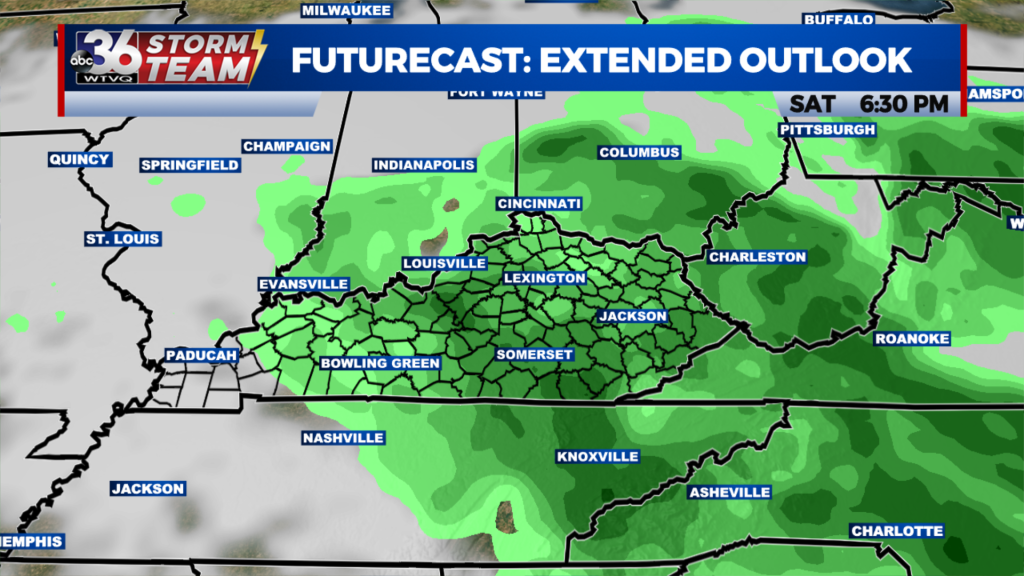 ABC 36 HOUR FORECAST
MONDAY NIGHT: A few clouds and mainly dry. Late storms possible Lows in the low to mid-60s.
TUESDAY: Breezy with scattered storms, some strong late. Highs in the upper 70s to around 80.
TUESDAY NIGHT: Storms end, the scattered clouds and breezy. Lows in the mid to upper 50s.