LEXINGTON, Ky. (WTVQ) – A medical miracle walked out of UK Hospital in Lexington to the cheers of UK HealthCare staff on Wednesday.

The celebration was for patient Victor Gonzales-Villatoro.  He has been fighting for his life since being admitted to the hospital last October after COVID-19 ravaged both of his lungs.

His family was told he had almost no chance of survival, and they considered withdrawing life support. As a last effort, UK doctors considered Victor a candidate for a double lung transplant and placed him on extracorporeal membrane oxygenation (ECMO) to see if his body could recover enough to withstand the transplant surgery.

For several months, while on ECMO, Victor remained unconscious. He awoke, and with a determined spirit, worked hard to gain the strength to receive a transplant — including getting up and walking while still connected to ECMO. On March 1, after five months on ECMO, Victor got a new set of lungs. Within a week, he was off the ventilator and walking.

Victor’s fighting spirit and unwavering determination endeared him to his care providers.

He will spend the next few weeks at Cardinal Hill Rehabilitation Hospital in Lexington where he will work to regain his strength and endurance. 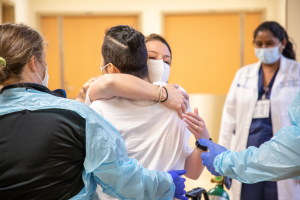 Fayette, Woodford counties back in the 'yellow' on latest COVID-19 map