With another area of low pressure spinning up from the southwest, some initial snow should change to rain on Wednesday.

After some light snow across Northern Kentucky Saturday and a few snow showers early Monday here in the Bluegrass, we’ve definitely seen a return of more January like weather across Central and Eastern Kentucky. The snow Monday morning was enough to coat the elevated surfaces before melting off pretty quickly. Clouds stuck around to begin the week with highs struggling into the mid to upper 30s for afternoon highs. 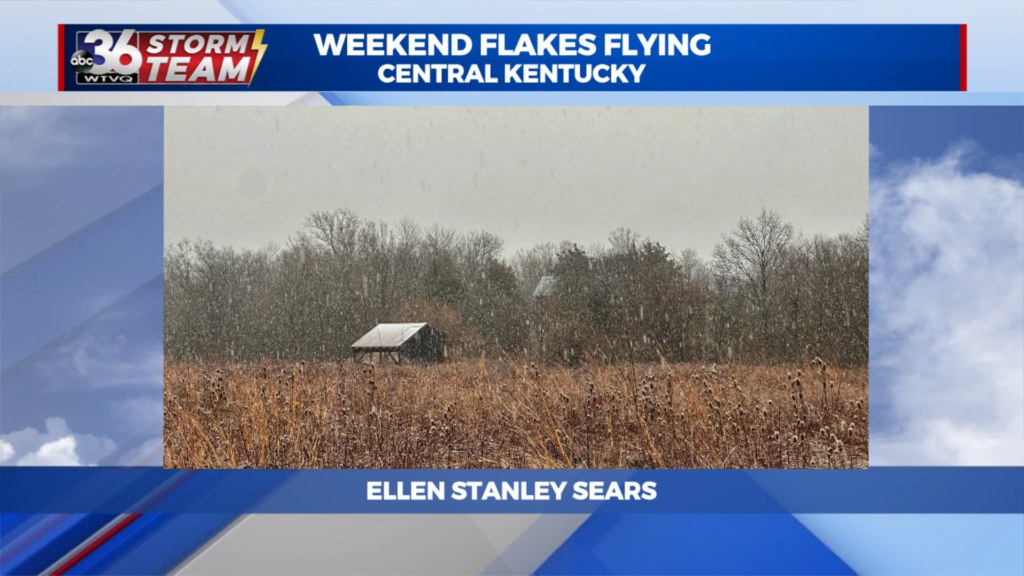 High pressure will nose in from the southwest on Tuesday, providing a dry day with a mix of clouds and sunshine as afternoon highs recover into the mid-40s, which is a few degrees above average for this time of the year. You’ll want to enjoy to quiet day as our next storm system approaches and moves in by early Wednesday. 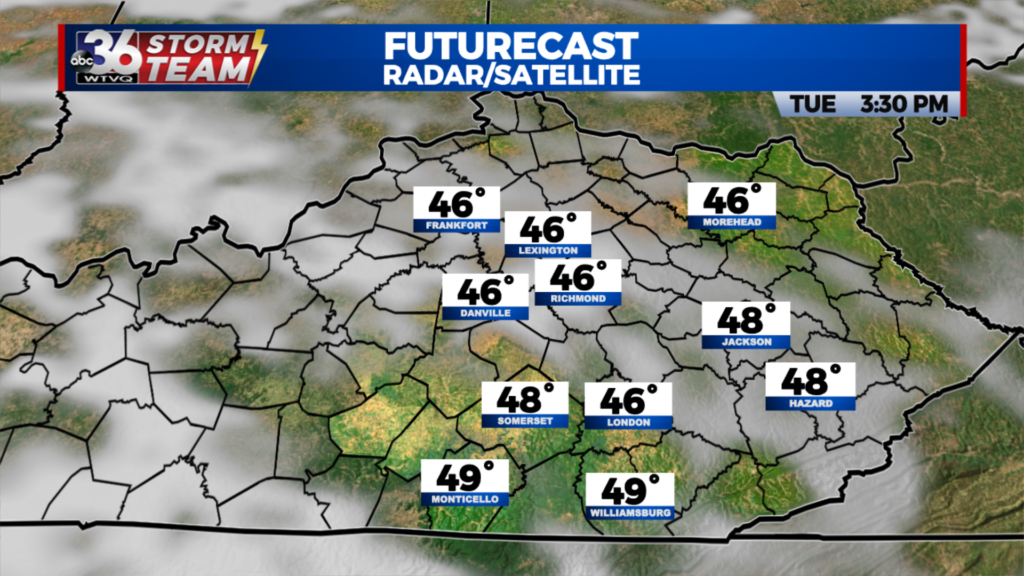 Wednesday looks to be a messy and windy day across Central and Eastern Kentucky as another wave of low pressure moves through the region. The exact track of the low and temperatures will be key components in determine what areas have the best chance of picking up some snow. At this point it looks like the farther north you are, the better off you’ll be for some decent snowfall…and those areas will be to our north across Indiana and Ohio. However, the I-64 corridor and points north have the best chance of some wet snow showers accumulating around 1″ or so during the pre-dawn hours Wednesday. As the low spins up the Ohio River, milder air will surge into the region with most spots topping out in the low to mid-50s as the mild air wins out and the snow melts. Winds will be gusty once again with 40 to 45 mile per hour gusts during the afternoon on Wednesday. 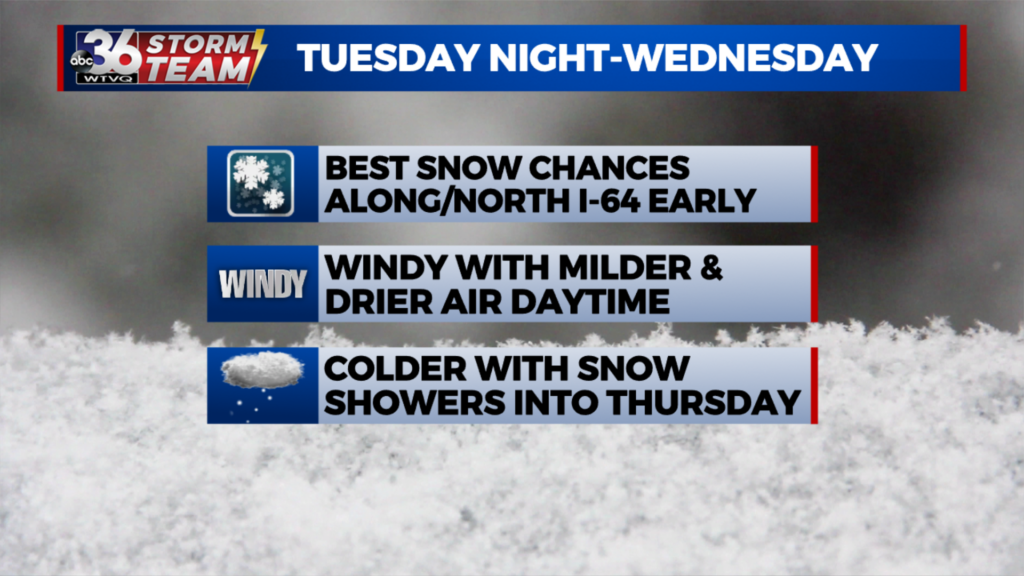 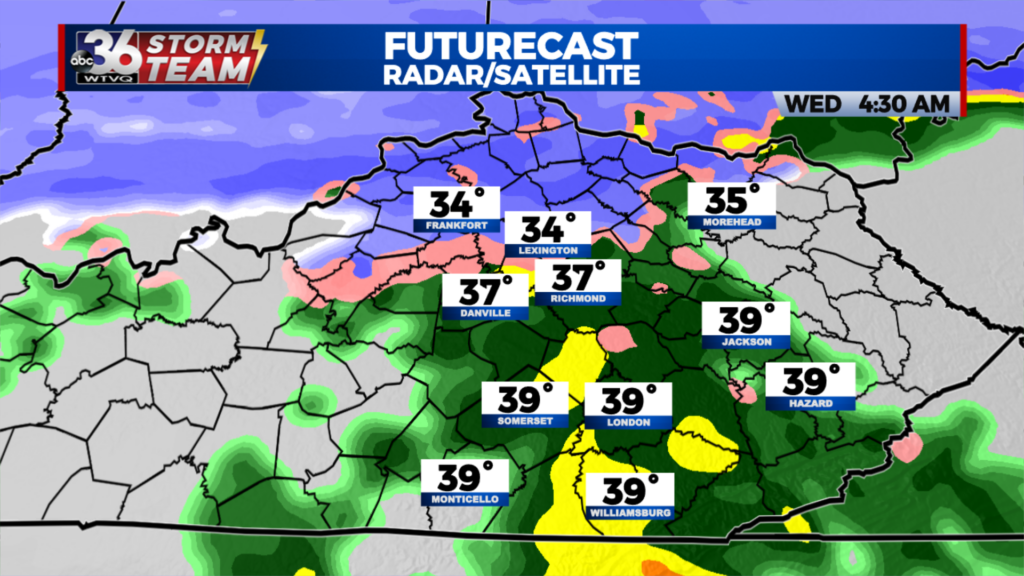 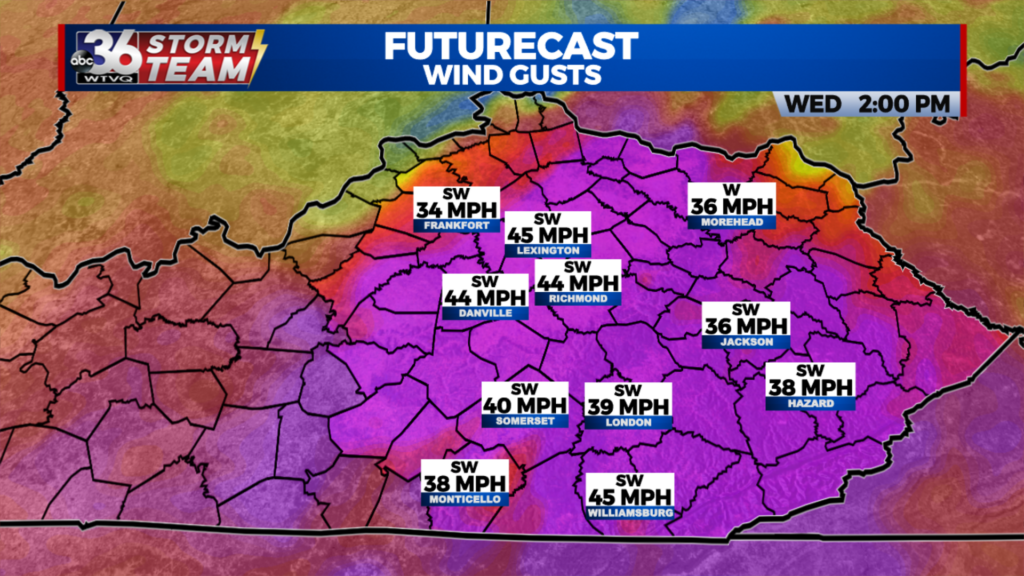 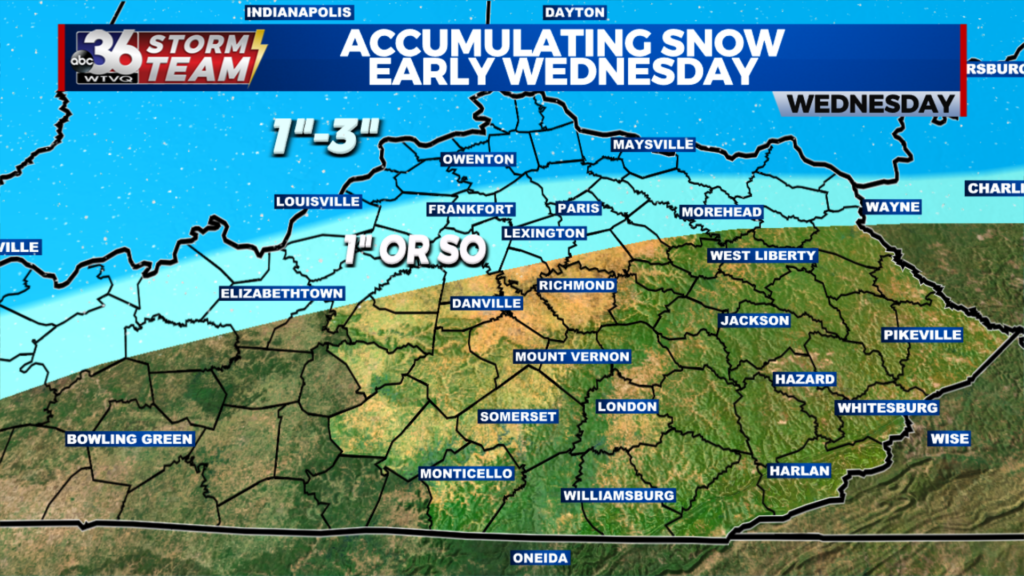 We could get a “dry slot” into Wednesday, which means the rain won’t be steady and should be more scattered showers by then. Remember the exact track of the low is monumental in what type of precipitation we get. 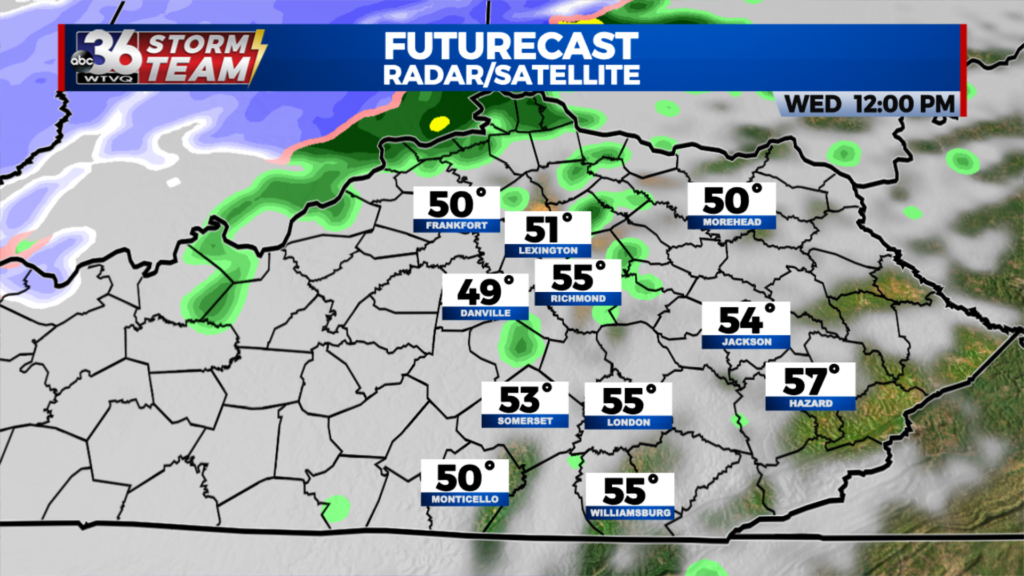 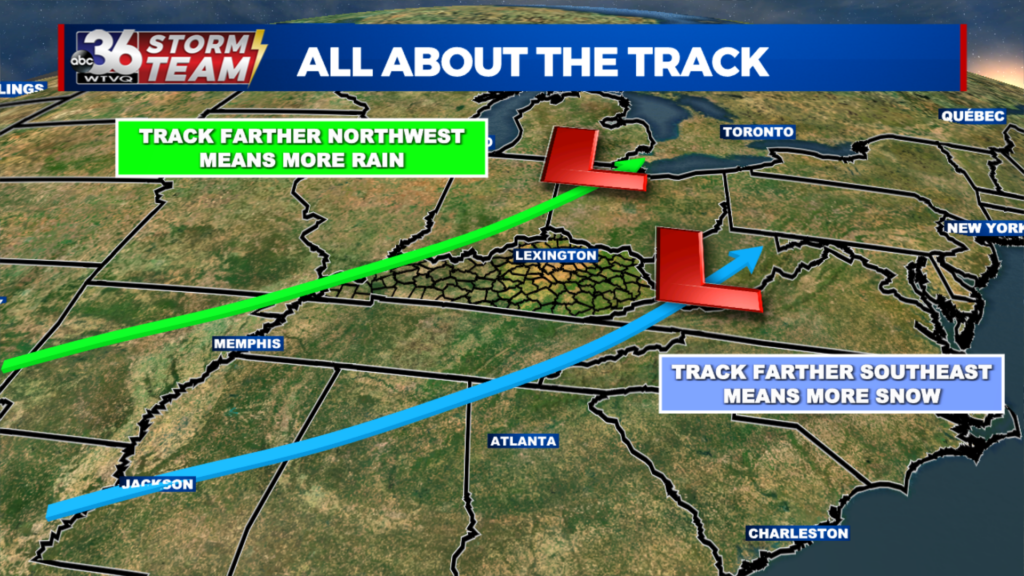 Once the low spins off to the northeast, we should catch the typical “wrap-around” snow showers with a northwest wind and colder air filtering into the region. This set-up typically gives us a chance to lay some light accumulations on the ground and with temperatures hovering around freezing Thursday, we’ll have to keep an eye on the roadways during the morning commute for slick spots if that scenario plays out. 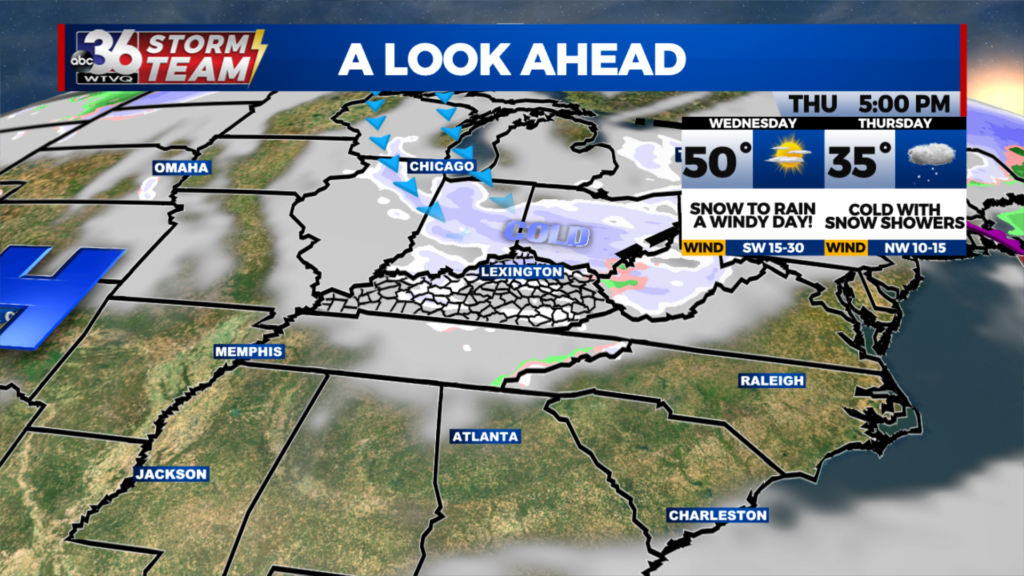 After a quiet end to the week and first half of the weekend, yet another storm system will make a run into the area, only this time it appears we are looking at an all rain event for the better part of it so it should be damp on Sunday. Not surprisingly, a few snow showers will be possible wrapping around the backside of that system as it moves eastward into early next week. 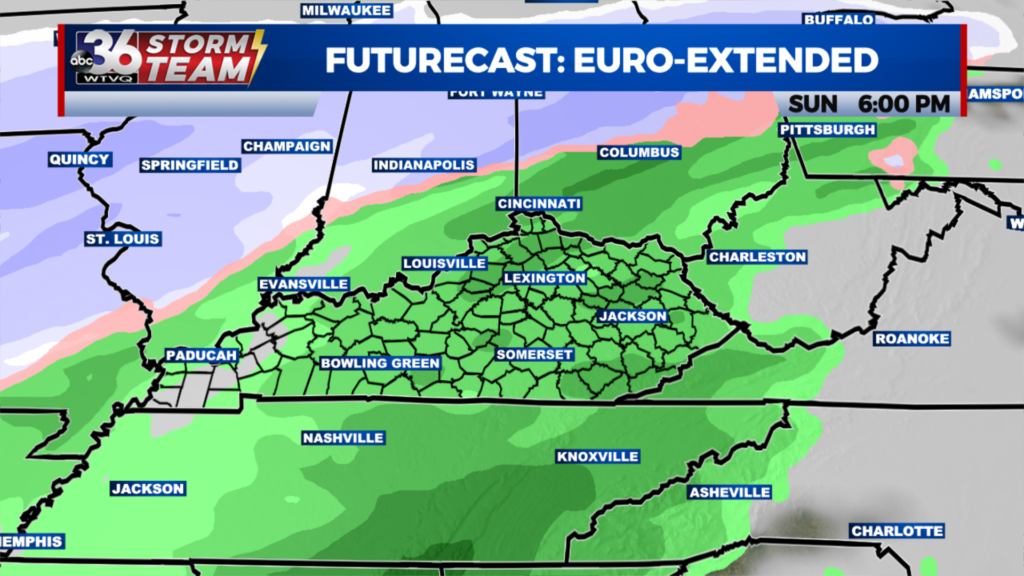 Tranquil weather on tap for the first weekend of February