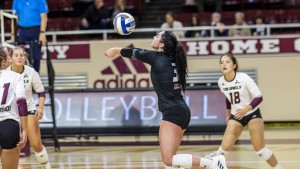 today from its Atlanta headquarters.

In two victories that helped EKU secure a spot in the ASUN Conference Tournament, Schoen averaged 5.30 digs per set and had four service aces.

The Columbus, Indiana native recorded her 1,000th career dig in a 3-2 win over Central Arkansas.

Schoen led all players with 26 digs and had two aces in a 3-2 win over Lipscomb.  She had a match-best 27 digs and two aces against Central Arkansas.

The Colonels will close out the regular season by hosting new ASUN Conference rival Bellarmine on Saturday, Nov. 13, at 1 p.m.  The 2021 ASUN Tournament will begin on Nov. 18 in Fort Myers, Florida.

In the decisive fifth set against UCA, the momentum swung in EKU’s favor midway through the set.  Central Arkansas went up 7-5 on a kill from Mackenzie Vernon before the Colonels rolled off a 6-1 run to take control.  A kill by Audrey Eurton tied it and an ace from Schoen gave Eastern Kentucky a lead it would never relinquish.

Schoen is second in the ASUN this season with 473 digs and fifth with an average of 4.11 digs per set.

Grome has now been named SEC Setter of the Week in back-to-back weeks, and three times this year. Additionally, Grome has an SEC Freshman of the Year honor to her name so far this season.

Grome set a new career high with 63 assists in Kentucky’s match Thursday night at South Carolina, marking the first time in her career she’s had 60-plus assists in a match. Grome averaged 12.3 assists per set as she led Kentucky to a .332 hitting percentage on the weekend with over a dig per set, as well.

With 63 assists versus the Gamecocks on Thursday night, the Loveland, Ohio native became just the sixth Kentucky player in program history to record 60-plus assists in a match in program history. 2020-21 AVCA National Player of the Year, Madison Lilley, did it twice in a Wildcat uniform.

In Friday night’s sweep, Grome had 36 assists, keeping her streak of 30-plus assist matches alive at 16 consecutive matches.