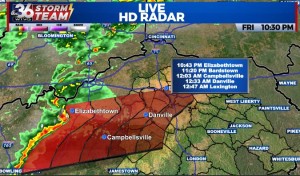 On the gloomy side Friday. but quiet. Mild temperatures in the mid-upper-60s. Breezy south winds 15-20 mph.  Rain was slim today.  We are not done quite yet for the night…or weekend. Heavier amounts look to be northwest KY-SE Indiana.  Strong storm potential will be there.  Strong-damaging winds are the highest threat.  Isolated tornadoes are not out of the question.  West of I-65 has a higher threat tonight.
Tonight: Mostly cloudy with a chance of showers and thunderstorms.  South winds 15-20 mph. A mild low again of 48.
Saturday: Mostly cloudy with light rain or sprinkles here and there.  Mostly isolated.  A cooler high of 55.
Sunday: Becoming mostly sunny and a high of 61
Monday: Partly cloudy and a high of 66.
Tuesday: a 50% chance of showers. A high of 63
Wednesday: an 80% chance of showers and thunderstorms, and a high of 68.
Thursday: Mostly cloudy with a 40% chance of showers and a bit cooler.  A high of 56
Today in weather history:
Lexington set a record of 79 on this date in 182.  Rainfall on this date in 2013 was a record 1.71″.
1987 – A storm in the central U.S. produced up to 10 inches of snow in western Nebraska, and up to six inches of rain in eastern sections of the state. The heavy rains pushed the Elkhorn River out of its banks, submerging the streets of Inman under three feet of water. (The National Weather Summary) (Storm Data)

1989 – A storm in the western U.S. produced heavy rain in California, with heavy snow in the Sierra Nevada Range. Venado CA was drenched with 5.40 inches of rain in 24 hours. A dozen cities in the eastern U.S. reported new record high temperatures for the date, including Baltimore MD with a reading of 82 degrees. (The National Weather Summary) (Storm Data)