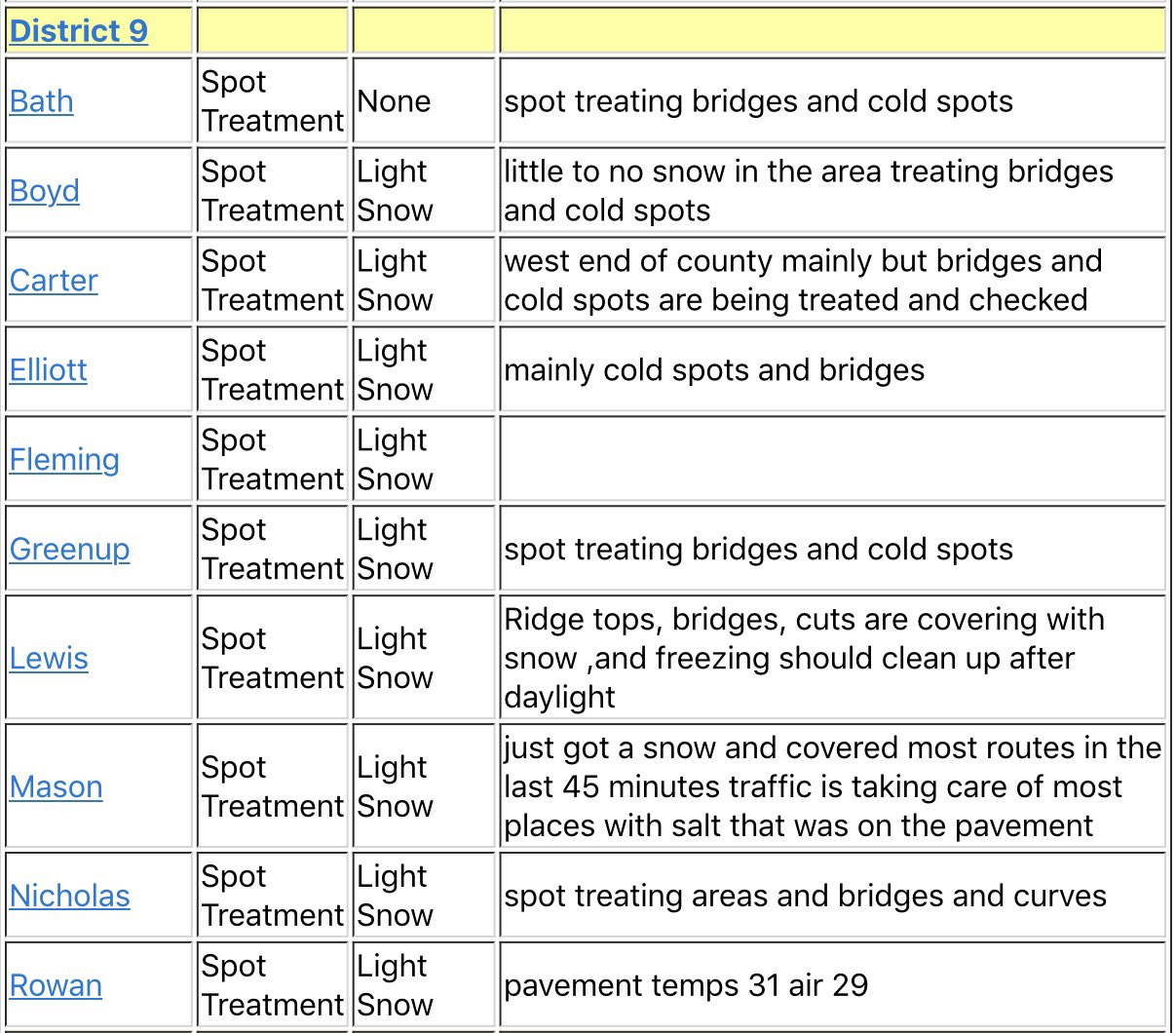 The Cabinet’s snow and ice information website, SnowKY.ky.gov, provides the public with maps of those priority routes, as well as helpful winter driving tips, fact sheets and videos on the snow removal process.

In addition, the public can monitor winter operations in real time on the state’s interactive traffic system GoKY.ky.gov to find out what’s happening on state routes in their local counties.

Crews will continue to treat roadways throughout the day but with expected highs of only 31 to 33 degrees, slick travel remains possible. Motorists who must travel should be prepared slow down, buckle up, leave a space cushion between vehicles for safe maneuverability, and remember that bridges and overpasses can freeze before roadways.

During winter storm operations, crews work around the clock on 12-hour shifts using more than 75 snow plows and other equipment to keep 2,000 miles of northeast Kentucky state highways passable.

Snow removal is a top priority of the Transportation Cabinet during winter weather season, said Steve Gunnell, chief district engineer. “And our highway crews are always prepared to keep motorists moving on Kentucky roadways,” he added.

KYTC salt and snow plow crews across a wide area of Kentucky are on duty.

“Clearing our streets and roads of snow and ice is a matter of public safety and an essential public service of our Transportation Cabinet,” Gov. Andy Beshear said.

“Planning for snow and ice removal is more than a cold-weather activity,” KYTC Secretary Jim Gray said. “We prepare for it nearly year-round procuring salt; checking, repairing and servicing equipment, and coordinating our teams. Im proud of the cabinets professionalism and dedication to this essential public service.”

More than 2,000 KYTC employees are available for efforts to treat and clear more than 63,000 lane miles of roads.

KYTC begins the current snow and ice season with 1,024 trucks with front-end blades, four others with tow-plows and 400 contract trucks. It also has stockpiles of salt, the largest being 100,000 tons stored underground in Louisville.

While road crews are out treating roads, motorists should:
— Exercise greater caution when driving. Slow down.
— Be prepared for slick conditions.
— Give lots of room to snow plows and other heavy highway equipment.
— Eliminate distractions while behind the wheel.

Priority A routes include critical state routes and those most heavily traveled such as interstates and main roads between counties or to hospitals, which receive the highest priority for snow-clearing efforts. Priority B and C routes include other important but lesser-traveled state routes.

Statewide, nearly 2,000 men and women serve on the frontlines and behind the scenes of the Cabinets snow and ice removal efforts.

The Cabinet is equipped with several hundred thousand tons of salt, as well as adequate supplies of brine and calcium chloride, and more than 1,000 deployable trucks and plows among the 125 snow and ice maintenance locations. More than 400 more contracted trucks are available to assist in snow and ice operations.

The Transportation Cabinet encourages motorists to prepare for winter and remain safe by following these tips:

– Pay attention to weather advisories. Weather will impact travel on some level, so prepare for a slower commute.

– Travel only as necessary during major snow events. Its better to be stuck at home than to be stuck on the road.

– Maintain a safe braking distance from other vehicles, as well as snowplows and other heavy highway equipment.

– Do not pass snowplows on the shoulder.

– Know before you go. Visit goky.ky.gov and download the free Waze app to check traffic conditions before you travel.

– Wear your seatbelt. It’s not only state law, but also your best defense in case of a crash.

– Cooperate with the expectations of the Quick Clearance law, which requires drivers to move vehicles to the shoulder in the event of a non-injury crash.