Sliding into Weekend, Diving into Next Week..

Following a sensational finish to the workweek, unfortunately because of the passage of a cool front, we’ll be sliding into the weekend temperature wise.  However, it be a dry frontal passage with still above the climatological average for temps running in the 40’s in the morning before topping out into the middle 50’s during the afternoon on Saturday with some filtered sunshine.  Overall, looks like very pleasant conditions for the Christmas Parade in downtown Lex. 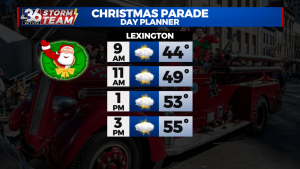 Moisture will be quick to collect by late on Sunday ahead of a stronger cold front set to arrive Sunday night with a good bet for a soaking rain.  Models indicate we could be looking at between three-quarters of an inch to locally an inch and a half before coming to an end by early Monday. 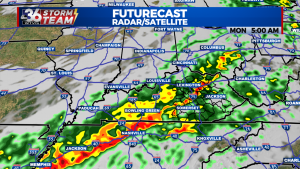 Temps drop precipitously early next week with highs struggling to reach 40 by midweek.  We could even see a little wet snow late Tuesday/early Wednesday. 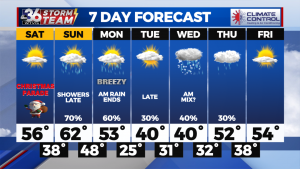 Another Cold and Dry Night Ahead.

Some Light Rain/ Snow Tonight For Some