NICHOLAS COUNTY, Ky. (WTVQ) – Kentucky State Police, Post 6 in Dry Ridge, received notification from the Nicholas County Coroner that the human remains discovered on September 28, 2020 (see story below), have been identified as Lori Feltz of Nicholas County, who was reported missing on December 26, 2016.

The State Medical Examiner directed the identification efforts with the assistance of a Louisville Odontologist; no cause of death has been determined.

The human remains will be sent to the University of Tennessee for further examination.

The indictments allege that from January 2016, continuing through September 17, 2020, both Peterson and Camous resided in Nicholas County and elsewhere; and while living there, they failed to register under the federal Sex Offender Registration and Notification Act (SORNA).  Both were charged with knowingly failing to register under SORNA, after qualifying prior convictions.

The investigation preceding the indictments was conducted jointly by the U.S. Marshals Service and Kentucky State Police.

If convicted, both face a maximum of 10 years in prison.  However, any sentence following conviction would be imposed by the Court, after its consideration of the United States Sentencing Guidelines and the federal statutes governing the imposition of sentences.

Any indictment is an accusation only.  A defendant is presumed innocent and is entitled to a fair trial at which government must prove guilt beyond a reasonable doubt.

CARLISLE Ky. (WTVQ) –  A renewed search for the remains of a Nicholas County woman missing since 2016 may have turned up results.

The break-through comes a week after two men who were persons-of-interest in her disappearance were arrested in Colorado.

The Kentucky State Police, Post 6 in Dry Ridge, received information regarding the whereabouts of the missing person, Lori Feltz. A location was pinpointed to a farm on Hovermale Lane in Nicholas County, Ky.

A search warrant was previously executed at Hovermale Lane on September 18, yielding no results.

A second search warrant was executed Monday at the same location; KSP located several articles of clothing and human remains in a wooded area. The Nicholas County coroner responded to the scene, and the remains were removed, pending identification.

Additional information may be available for release as the investigation continues. The on-going investigation is being conducted by Detective Chris Lairson.

Two men who are possible person’s of interest in her disappearance were picked up last week in Colorado at about the same time the KSP received information about the location.

NICHOLAS COUNTY, Ky. (WTVQ) – A search continues in Colorado for two men connected to a woman who went missing in Nicholas County in 2016.

According to a Facebook post by the El Paso Sheriff’s Office in Colorado, the two suspects are wanted for a sex offender registration violation.

The post also says, “Both parties are persons of interest in the 2016 disappearance of a woman in Nicholas County, Kentucky.”

seen when she left her home to go for a walk on Dec. 26, 2016. When deputies were searching the area, they ran across the two men and didn’t make any connection to the missing person until later or know they were wanted.

Feltz’ had mental issues caused by a serious accident.

When deputies returned later with a search warrant, the two men were gone but now are wanted for questioning. The two men were living in a shack on property owned by Peterson’s mother, Penny Gillis. 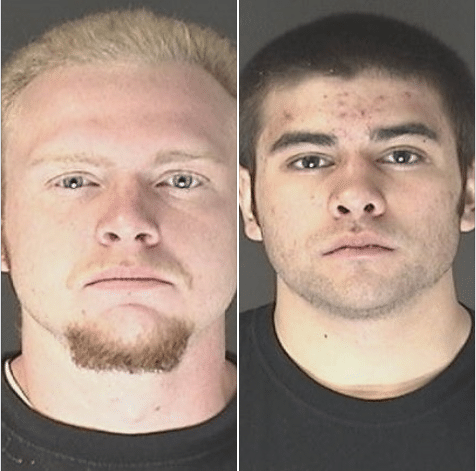 According to the sheriff’s office, Camous is 5’6” tall, weighs 160 lbs with brown hair and brown eyes. He has two felony and one misdemeanor arrest warrants for Failure to Register as a Sex Offender, Failure to Comply with a SAC (Sex Assault on a Child) Sentence and Failure to Appear on a Driving Under the Influence charge.

Peterson is 5’8” tall, weighs 175 lbs with red hair and blue eyes. He has three felony and one misdemeanor arrest warrants for Failure to Register as a Sex Offender and Failure to Comply with Probation, according to the sheriff’s office.

The sheriff’s office reports neither men have known addresses or associated vehicles and are both believed to be homeless and possibly living in shacks in the El Paso, Teller, and Northeastern Colorado areas.

Camous and Peterson are considered armed and dangerous. Anyone who knows their whereabouts should not approach the men. You’re asked to contact the Investigations Tip Line at the El Paso Sheriff’s Office by calling 719-520-6666 or emailing: Tips@elpasoco.com. 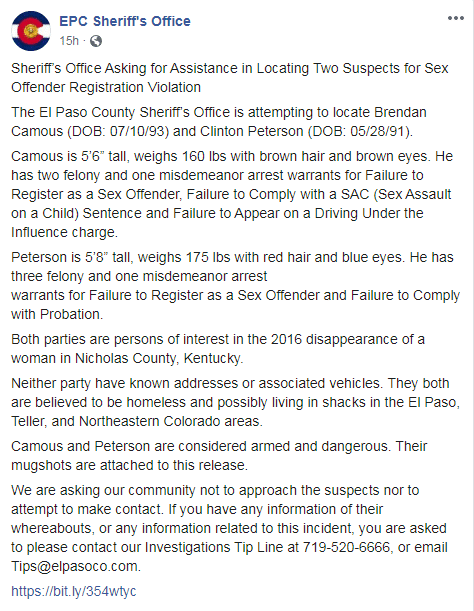