A Bit Cooler to Start the Weekend. Chief Meteorologist Jeff Andrews Has Your Outlook

wtvq_staff,
Rain moves into the area Friday.  Depending on the track of the low, we may not see much rain.  Heavier amounts look to be northwest KY-SE Indiana.  Stronger storm potential will be western KY, southern Indiana and southern Illinois.  The Storm Prediction Center has our viewers in a Level 1- Marginal Risk.  Strong-damaging winds are the highest threat.  Isolated tornadoes are not out of the question.  West of I-65 has a higher threat (slight).
Tonight: Partly/mostly cloudy.  Light winds. A mild low of 50. 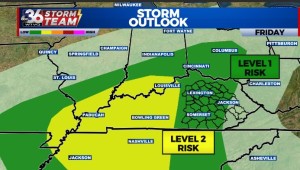