FRANKFORT, Ky. (WTVQ) – The selfless acts of kindness displayed by school personnel after the historic 265.7-mile tornado on Dec. 10 and 11 were recognized Jan. 27 by the Kentucky General Assembly.

Senate Resolution 76, which passed on the floor of the Kentucky State Senate, and House Citation 29, which was passed on the floor of the House of Representatives, praised the efforts of school personnel in the impacted districts for their immediate actions to assist and ensure the safety of students and families. Superintendents, who have acknowledged the many acts by school personnel acting of their own volition, were recognized for their leadership and on behalf of their staff.

Senator Max Wise, who is from Taylor County and the primary sponsor of SR 76, said that school personnel “went above and beyond” after the tornado and praised the “collaboration and teamwork” – even among school rivals.

“It was a time when everything was put aside and we were one,” he said. “We were one western Kentucky and we continue to be.”

Rep. Myron Dossett, the citation sponsor who represents parts of Christian and Hopkins counties, expressed his pride in the heroic actions of the school personnel and superintendents and all they did to “lift the spirits” of those in the communities.

“God bless you,” he said, expressing gratitude for all they “have done for each and every one of us who has endured this storm.”

The superintendents and the districts they represent that were named in the resolution and citation included:

SR 76 and the House citation state that “immediately after the tornadoes touched down, school personnel, without solicitation or regard for their own needs and situations, began to do what they do best – provide support to their students, their families, and their communities.”

School personnel instantly sprang into action checking on students and families. Even though some of them had their own houses damaged by the tornado, they still went door to door to check on students, opened schools as triage centers or shelters, used schools as a supply center, provided counseling and helped with the search for students and families.

“Our educators and school staff genuinely care about the students, their families and the communities and that was abundantly evident in the aftermath of this tragedy,” said Commissioner of Education Jason E. Glass. “They reached out to assist and support others, despite their own circumstances. It’s just what they do. They care and they offer help.” 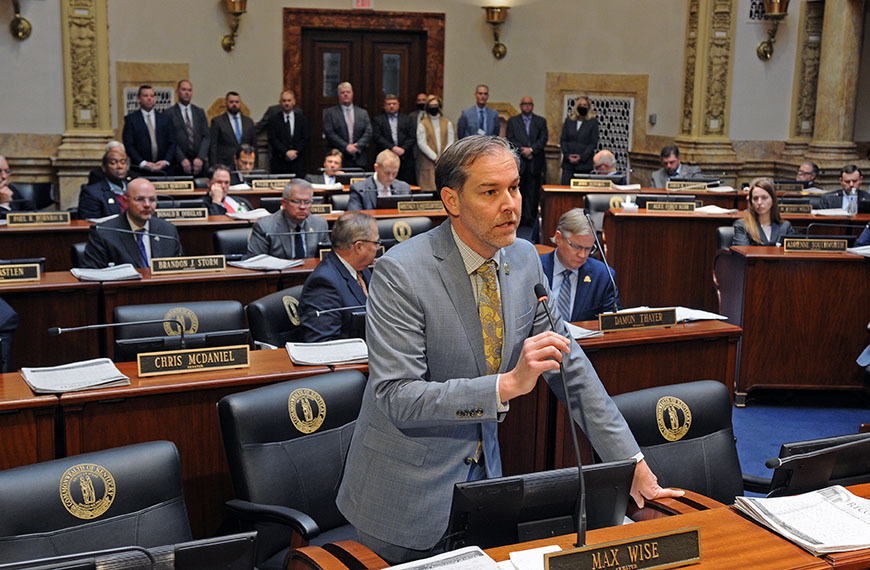 Earlier in the day, the Senate Education Committee heard from three of the superintendents — Joe Henderson of Mayfield Independent, Leonard Whalen of Dawson Springs Independent and Matthew Madding of Graves County — about the actions of personnel and current and future needs of districts and their losses.

Henderson said people turn to schools in time of need. In the minutes that followed the tornado, the thoughts from school personnel were, “we’ve got to help our people.” And that is what they did.

He said the districts reopened for school as soon as possible, with Mayfield returning in 10 days. When the students are at school, he explained, they know the students are warm, safe, have meals and are around people who can assist with their needs, specifically mental health issues.

The superintendents acknowledged the donations and other aid they have received from around and outside the state and the financial assistance in Senate Bill 5 and House Bill 5, which appropriates disaster recovery and relief funding for western Kentucky. However, Whalen said the districts are going to need additional assistance to get back on their feet and will need it for years to come.

The superintendents explained that they have lost average daily attendance (ADA) funds — about $4,000 per student that is used for the operation of schools – because some displaced students have had to go to other schools. The districts also have lost millions in taxes on real property, motor vehicles and others.

Senate President Robert Stivers, a member of the Senate Education Committee, explained the ADA, which is a primary funding stream for schools, may not return or will return at a slow rate. He also noted that the loss of property taxes and others taxes will affect districts. The districts are losing significant funding but will continue to have operational expenses and other recurring costs.

Mayfield Independent already is looking at future expenditures they must address. The district lost its entire transportation/maintenance department, including buses. Even though they were well insured, Henderson said insurance will not cover replacement costs because older buses – valued at around $10,000 and that were still in good condition – will have to be replaced with new buses, costing about $95,000 each.

Whalen said 20% of his staff lost everything in the tornado and encouraged legislators to pass legislation for disaster days.

Stivers explained that House Bill 5, which was a mirror bill to Senate Bill 5 and has been signed into law by Gov. Andy Beshear, is a $200 million tornado relief bill that appropriates $155 million in general funds for fiscal year 2021-2022 to the West Kentucky State Aid Funding for Emergencies (SAFE) Fund. It also earmarks $30 million to the Kentucky Department of Education for school districts and $15 million to Kentucky Emergency Management to purchase temporary FEMA-eligible housing.

This measure was good, but the superintendents agreed that their financial needs will continue for years to come.

Despite the devastation of their schools and communities, the district superintendents are leading their districts forward.

Madding acknowledged the “overwhelming” outpouring of “love and generosity” felt in the communities after the tornado.

Upon hearing of the devastation, school districts and communities from all regions of the Commonwealth reached out to the affected communities with donations of money, necessities and toys for Christmas, as well as supplies and even buses to help the schools reopen.

“Amid the deep sadness and devastation,” SR 76 and the House citation stated, “the statewide school family pulled together to aid students and families, reaffirming the belief that the school system is the heart and spirit of the community.”