CYNTHIANA, Ky. (WTVQ) – New measurements and estimates show Cynthiana may get a little break from original forecasts that showed flooding could hit the highest levels since 1997.

The last measurement on the Licking River was at 7:30 p.m. and had the river at 21.95 feet, according to the Harrison County Emergency Management.

Based on those numbers, the river is now expected to crest at about 22.4 feet at about 11 p.m. Tuesday.

Earlier Tuesday, the crest had been projected at about 24.5 feet at midnight and possibly as much as 26 feet.

CYNTHIANA, Ky. (WTVQ) – The mayor of Cynthiana has declared a state of emergency ahead of likely significant flooding.

Cynthiana in Harrison County may be the hardest hit by flooding with Paris in Bourbon County also expected to see some problems from scenic rivers that run through the heart of each city.

Mayor James Smith declared a local State of Emergency due to flooding of the South Fork of the Licking River. Local Emergency Operations Plan has been executed, the city said on its web site.

“If you live in a flood prone area please be prepared to take action and evacuate if necessary. The projected crest is currently 26 feet which is 6 feet above flood stage. At 26 feet major flooding will occur,” the city said, raising the expected crest more than a foot from what was projected at mid-morning.

Cynthiana has warned parts of the city to evacuate because the Licking River is expected to crest at about 26 feet at midnight Tuesday which is “major flood” level.

A shelter is being set up at Harrison County Middle School at 269 Education Drive in Cynthiana for people needing refuge. 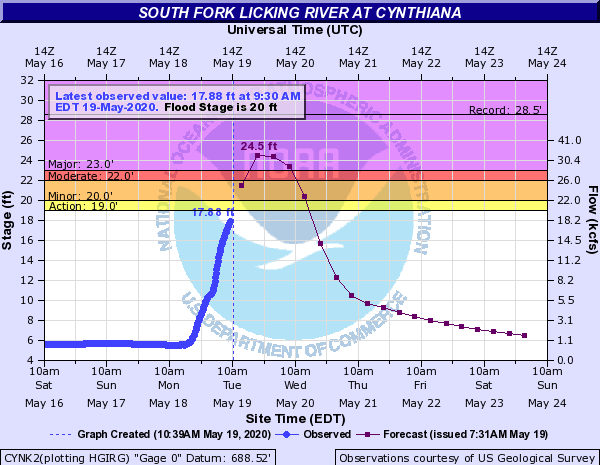 Chart shows expected flood stages along the South Fork of the Licking River in Cynthiana and illustrates how fast the water is expected to rise. Click on the chart to enlarge.

the city public utilities department is advising people and businesses along the Licking River move themselves and their belongings to higher ground.

The South Fork of the Licking River is expected to be at 26 feet at about midnight Tuesday.

The following is a guide used at the Cynthiana Water Treatment Plant to gauge possible flooding.

At 20 feet, the River Road Park is flooded; at 22 feet, Pleasant Street bridge, Locust and Penn streets flood; at 23 feet, some homes on the west side of town flood and at 24 feet some businesses on U.S. 62/U.S. 27 South and KY 36 West and South of town are flooded.

As a reference, Lourena Judy, commissioner of public utilities, said in 1997 when Cynthiana and Harrison County experienced the devastating flood, the river peaked at 28 feet.

Meanwhile, Stoner Creek which runs along the edge of downtown Paris 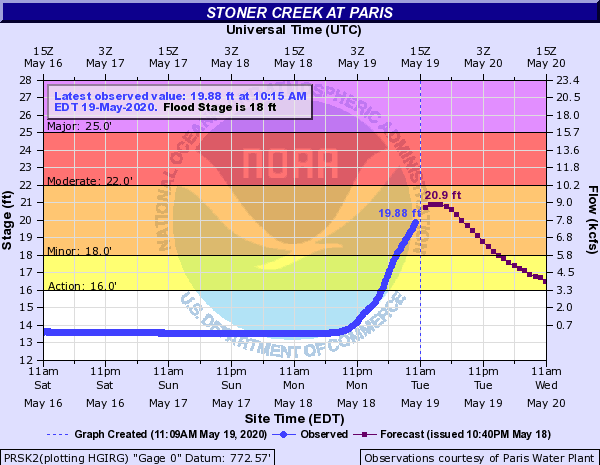 Chart shows flooding projections for Stoner Creek in Paris. Click on the map to enlarge.

also is expected to produce “minor flooding,” according to projections from the National Weather Service.

Gov. Beshear: ‘Our Future is Now. time to move the state forward with bold investments.’