Car flips, two gun-toting men claim the other was kidnapping them: Police

NICHOLASVILLE, Ky. (WTVQ) – Nicholasville Police still are sorting out what they called a “crazy” incident Monday afternoon that left a car overturned on a restaurant patio, two men injured and 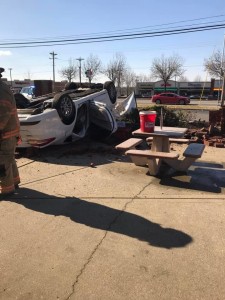 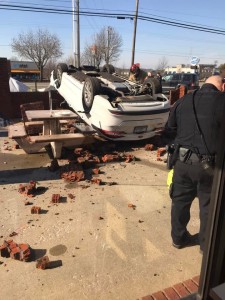 claiming they were being kidnapped by the other.

It happened at about 2:10 p.m. when a southbound Ford Fusion made a sharp turn from East Main Street into the Wendy’s parking lot. The driver lost control and the car flipped on the patio, police said. The driver jumped out waving two guns, yelling the driver was trying to get him. He stashed two guns in bushes near the restaurant but witnesses were able to point them out to officers who arrived quickly.

When the driver was able to get out, he claimed the passenger was kidnapping him and speeding up was the only way he thought he could get free, according to what witnesses told police and what the man later told officers. The two men are “acquaintances,” police said.

Both men were taken to the hospital in Nicholasville for treatment and remained there as of 4:15 p.m.

On Facebook, Debbie Oxendine Collins said she was having a late lunch at Wendy’s when the accident happened just a few feet away.

“I think the scariest part was when I ran out to help a guy climb out of the mangled mess with a gun in his hand yelling ‘he’s trying to kill me’ while looking back at the car. He then took off running away from the scene. I went towards the car. When I got almost to the opened door, another guy crawled out with a gun. Everyone outside took off running. I went back inside telling them to lock the doors and call the police. I am thankful that no one was shot! Another day in Nicholasville,” she wrote.