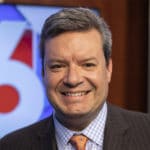 Doug High has been a News Anchor at ABC 36 since 2009 and currently co-anchors ABC 36 News at Noon / “High Noon” with his wife, ABC 36 Anchor and Lifestyle Reporter, Lyssa High.

Doug is a Commander / Public Affairs Officer in the U.S. Navy Reserve, having requested a direct commission following September 11, 2001. His missions have taken him around the world over the past 20 years. Commander High is a decorated veteran, having deployed to Afghanistan in 2017.

He is a 1992 graduate of Otterbein University in Westerville, Ohio where he received a Bachelor of Arts in History/Political Science.

Originally from Mansfield, Ohio, Doug and his family are proud to call Lexington and the Bluegrass home since 2000.  He and Lyssa have two teenage sons, Jackson and Harrison.

You can email Doug at dhigh@wtvq.com

Hanging Out With Newport’s Best-Dressed Residents…

The Smoky Mountains are Calling…..