1,280 fake watches worth $25 million intercepted by CBP in Louisville

LOUISVILLE, Ky. (WTVQ) – As shoppers logon to purchase presents for friends and family, 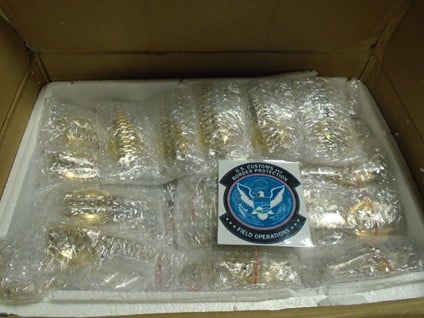 consumers need to know who they are buying their gifts from before they end up with a worthless item or empty handed.

This week, U.S. Customs and Border Protection agents in Louisville helped provided some of that security.

CBP officers halted four shipments, all from the same shipper in Hong Kong, that each contained 320 counterfeit Rolex watches. All four shipments were headed to Salt Lake City, Utah.

Each package was mis-manifested, and CBP officers inspected the parcel to determine the admissibility of its contents in accordance with CBP regulations.

The watches were reviewed by an import specialist who determined the items were counterfeit. In all, 1,280 watches were seized.

If these items were real, the total MSRP for these would have been $25.2 million.

“During this holiday season consumers are always looking for the best deal, the unfortunate part is criminals are also online pedaling their counterfeit products,” said Louisville Port Director Thomas Mahn. “Our CBP officers will continue to seize counterfeit items that threaten the safety and health of consumers and weaken the U.S. economy.”

CBP seizes a wide variety of counterfeit products from all over the world every year. In Fiscal Year 2019, CBP seized over 27,000 shipments of counterfeit goods worth over $1.5 billion, had the goods been genuine.

The most commonly counterfeited goods are watches and jewelry; apparel and related accessories; handbags and wallets; footwear; and consumer electronics.

EKU secures come from behind win over Kennesaw State

Henry Clay gets the win against East Jessamine