Crump rode Fathom in the 1970 Derby and, although the thoroughbred finished 15th, Crump rode into history.

The announcement comes 33 days from the 146th running of the Kentucky Derby on September 5.

“This has certainly been a challenging year,” said Kevin Flanery, President of Churchill Downs Racetrack.

Flanery says amid the pandemic, the Derby has an even greater significance this year with balancing protocols to conduct a safe and memorable derby.

“It’s the single most important contribution we make to the community,” said Flanery.

It’s also the 100th anniversary this year of women’s suffrage.

Flanery talked about Crump’s historic ride in the Derby at a time when women weren’t thought of in the sport, saying, “What was once thought to be impossible often can and should be challenged.”

“The $1,000 Mint Julep program has become a cherished Derby tradition and this year we are honored to mark an important moment in Derby history while also raising money for charity,” added Woodford Reserve Master Distiller Chris Morris.

In years past, anyone who purchased a julep cup could only pick it up on Derby Day at Churchill Downs. Due to the global pandemic, the cups will be sent directly to consumers and Morris will conduct a virtual julep experience on Derby Day, which has been postponed this year to Saturday, September 5, 2020.

Proceeds from the cup sales will be donated in Crump’s honor to the Permanently Disabled Jockeys Fund.

The cups feature etchings of the jockey silks worn in 1970 by Crump, along with the Twin Spires of Churchill Downs. They are nestled in a walnut case with a replica of turquoise and white silks that Crump wore that historic day.

The cups have special meaning to Woodford Reserve and its parent company, Brown-Forman, which this year is celebrating its 150th anniversary.

The cups were designed and handcrafted by From the Vault Jewelers in Louisville and the silks for the walnut containers were made by Bourbon Cousins of Cincinnati.

(blackberry is the official fruit of Kentucky)

At the bottom of the julep cup mix 1 bar spoon of blackberry preserves and 1 bar spoon of simple syrup. Add 2 – 4 dashes of mint bitters. Fill two-thirds of cup with crushed ice. Add sipping straw and Woodford Reserve Bourbon. Top off cup with more crushed ice (packed in). Top with fresh blackberries and a sprig of mint to garnish. Put the mint near the straw, so the smell enhances each sip. 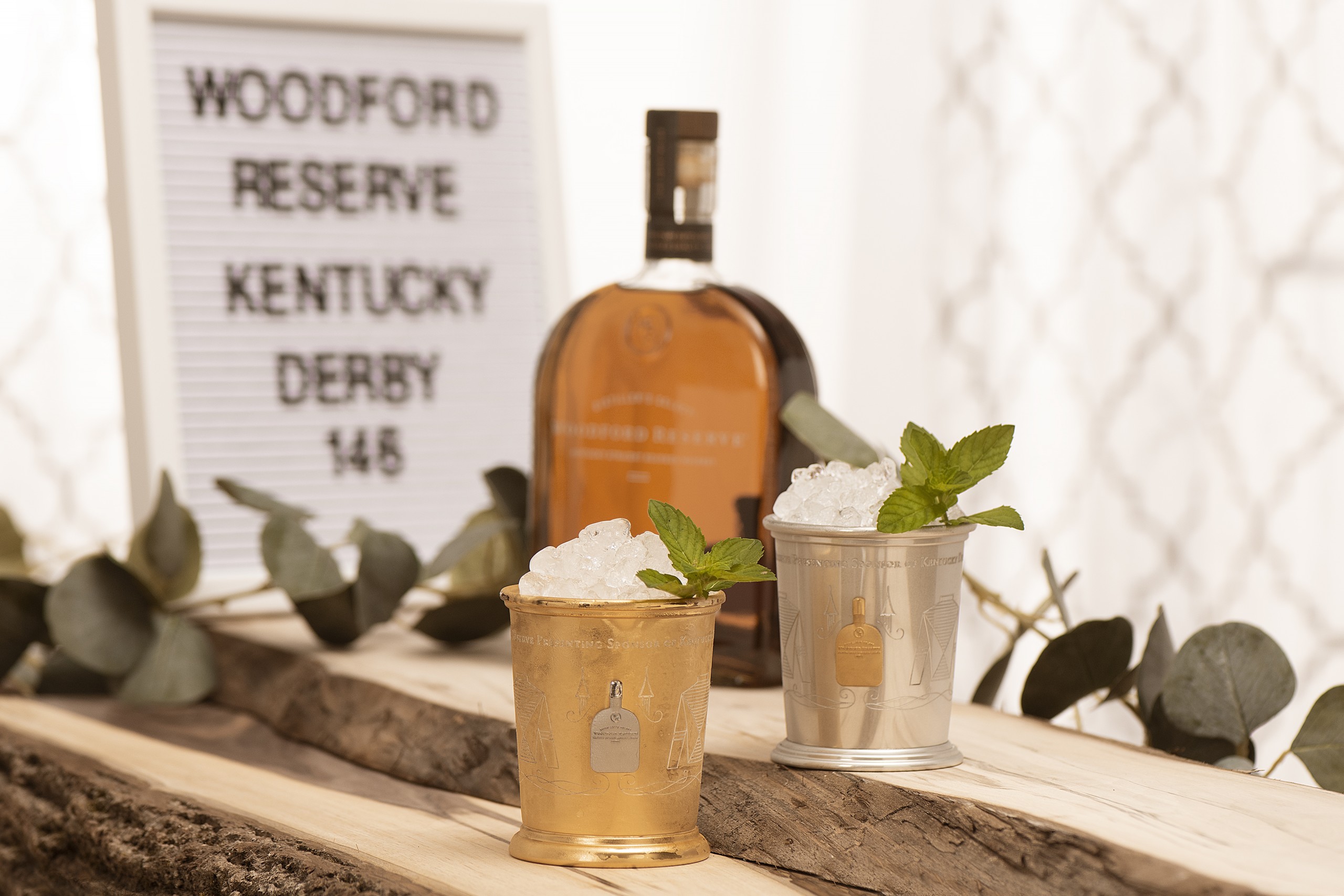 Crump lives in Virginia and remains involved in the horse industry, according to the Brown-Forman Corporation.

Flanery said safety protocols for the upcoming Derby will be released in the coming days.