Man turns himself in after running from police on N. Broadway

UPDATE: (10:12 p.m.) – Guy House, the man accused of running from police with a gun on North Broadway Sunday has been booked into jail.

According to the jail, House has 19 charges against him, including fleeing police and felony possession of a gun, among others.

The jail says 4 of those charges are from Sunday’s arrest, the remaining stem from multiple warrants. The remaining charges include no registration plates, criminal mischief, leaving scene of an accident, among others.

There are also charges for theft, and contempt of court that are warrants out of Madison County that are not listed with the Fayette County Detention Center. 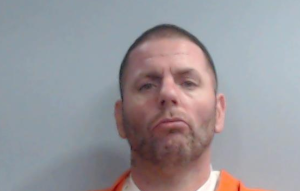 UPDATE: (7:40 P.M.) – Lexington Police say officers observed a man with known warrants and attempted to make conta ct with him

Police say when the officers attempted contact, the man ran into the wooded area with a gun.

Members of the Emergency Response Unit and Crisis Negotiations responded and were able to negotiate with the man.

Police say after 5 hours of negotiation, the man turned himself in without incident.

UPDATE (5:27 P.M.) We are still on the scene, waiting for police to provide any information. Our reporter spoke with witnesses who say they stopped to change a flat tire, when they saw a man walking. A short time after they saw police who they say told them to get down and that the man had a gun.
They say that man walked towards a wooded area.

We will continue to update you as we know more.

LEXINGTON, Ky. (WTVQ) – A heavy Lexington Police presence is on scene at North Broadway near the I-64/75 interchange.

It is unclear right now why police are there.

Our reporter on the scene says there is a helicopter circling the area.

We will continue to give you updates as we get more information.

ABC 36 has a reporter at the scene.

DEVELOPING: ABC 36 has a reporter headed to North Broadway where there is a large police presence on scene. It is unclear right now why police are there.
We will continue to update you as we get more information from officials.
🎥 Courtesy: Aveory Faircloth pic.twitter.com/hrIlsoUunJ

Paws 4 The Cause hosts annual Barktoberfest