For four days, the team worked 81 continuous hours, a tough job they say took a lot of mental preparation.

“It was probably one of the, one of the worst scenes that I’ve been to as far as deployments, and I’ve been to a lot of hurricanes, a lot of collapses and just the devastation for the whole city it was pretty amazing” said Captain Ryan Hogsten.

The team reported immediately to the candle factory which was destroyed by the tornado, and left eight people dead.

“When we saw the City, the downtown Mayfield, and then some other neighborhoods going up to it, it was complete destruction. And there’s no other way to say it. It was just like a bunch of Lincoln Logs or Lego’s that were put together and somebody kicked them and swiped them over” added Capt. Hogsten.

The crew assisted in excavating the area, and sifting through debris, as they accounted for and searched for survivors…before moving to other areas in the city.

For four days, the team worked 81 continuous hours, a tough job they say took a lot of mental preparation.

“A major collapse of this size is not something we do every day. We are trained and we train quite often for it but it’s one of those low frequency, high impact type events right and so I wouldn’t say there was concern but guys were getting their head straight as we were driving down there” added Capt. Hogsten.

Capt. Hogsten says the community has come together to help in recovery efforts, with donations pouring in from all across the commonwealth and country…but there’s still a long way to go.

———
LEXINGTON, Ky. (WTVQ) (DEC 15TH, 2021)  – The 17 firefighters Lexington sent Saturday to western Kentucky to help with search, recovery and clean up have returned. While deployed, their assignment was clear – to save as many lives as possible. They described their experience as humbling. 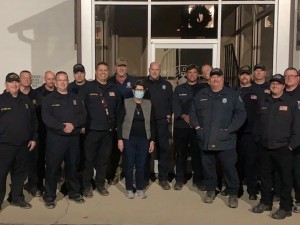 “We are incredibly proud of our members’ professionalism and honored to call them brothers as they exemplified the words of Coretta Scott King when she said, ‘The greatness of a community is most accurately measured by the compassionate actions of its members,'” the department said on social media.
Categories: Featured, Local News, News
Tags: Lexington Firefighters, Recovery, tornado rescue