First-time pageant entrant won the title of Miss Kentucky USA in May 2021.

ABC-affiliate WHAS in Louisville, where Smith works as a reporter, shared congratulations for the University of Kentucky grad in a post saying, “WOW!!! This is quite the accomplishment!! Our Elle Smith is your new MISS USA!” 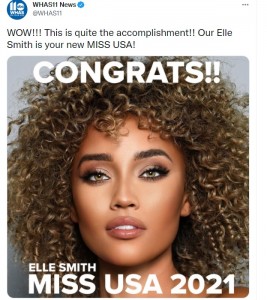 LEXINGTON, Ky. (UK Public Relations) — With beauty, brains and the Big Blue Nation supporting her, one University of Kentucky College of Communication and Information (CI) alumna plans to try her luck at trading in her title as Miss Kentucky USA for Miss USA.

Elle Smith, a 2020 journalism graduate, won the title of Miss Kentucky USA in May 2021. While her performance may have had some people believing she was a pageant veteran, this was her first time competing in a pageant. And the road that led her to the pageant life started at UK.

Although Smith fell in love with UK the first time she stepped on campus, she felt like the odd one out once she started her freshman year. Not only was she unsure of what to major in, but she also seemed to be one of the few of her peers who hadn’t competed in pageants previously. But she set her mind to make a change.

Her interest in writing and politics led her to CI. Once she got a camera in her hands, it was only a matter of time before she fell in love with journalism. During her years in the college, she participated in the UK Student News Network, the Kentucky Kernel, WRFL and the National Association of Black Journalists (NABJ), the latter of which she served as vice president during her senior year. It was through an NABJ conference that Smith landed her job with WHAS-TV in Louisville.

“I felt so much support from staff, faculty, peers. And there are also so many different opportunities for journalism students,” Smith said. “I think those are what led me to get this job in Louisville right out of school.”

WHAS-TV, an ABC-affiliated station, is a top 50 market, so Smith came into the job a bit intimidated. As a southern Indiana multimedia journalist, she is responsible for finding, pitching, shooting and editing hard news stories every day. She has a list of about 100 contacts that she has spent extensive time building relationships with, on and off the clock. She said her job was the kind you took home and was constantly on your brain. But thanks to her first “big girl job,” she was finally able to afford competing in her first pageant.

In December 2020, Smith committed to competing in the May 2021 Miss Kentucky USA pageant. Leading up to the competition, she prepared diligently, meeting a pageant coach and personal trainer multiple times a week, then every day as the competition drew near.

When the competition finally arrived, Smith was terrified. But once she was literally pushed onto the stage, she said she relaxed and had the most fun she’s had in a while. She competed as Miss Germantown against over 40 other women from across the state. After individual interviews and preliminaries, which included swimsuit and evening gown, the competition was cut down to just 15 women who competed in swimsuit, evening gown and on-stage question.

Luckily for Smith, her life experiences helped prepare her for the pageant. Not only were interviews part of her everyday routine at work, but she also had modeled occasionally since her senior year of high school. While she acknowledges the Miss USA organization focuses on glamour, she believes they also value well-rounded women, and Smith clearly fit the bill.

“The moment they called my name it was shock and then relief just because there had been so much hard work to get me to that moment,” Smith said. “And I never walked in wanting to win. I wanted to do the best that I could but also know that I had put in the work to be there, put in all the work I needed to do to be on that stage, and I could say that. That’s why I would’ve been happy no matter what.”

As Miss Kentucky USA, Smith is representing the state for the next year in addition to working her full-time job as a reporter. She has made appearances at ball games and other pageants across different states while also appearing on camera to cover news stories for work.

The juggling act that her responsibilities require are only intensified with the preparations Smith must make for the Miss USA pageant coming up on Nov. 26-29, 2021, in Tulsa, Oklahoma. She will spend two weeks in Tulsa competing against 50 women on a grueling 4 a.m. to midnight schedule. Ahead of that competition, Smith has to design her own gown, state costume and self-branding on top of physically and mentally preparing herself. If she wins Miss USA, she will give her Miss Kentucky USA title to the Kentucky runner-up and move to Los Angeles on a full salary to represent the nation for a year.

It’s a tall order, but Smith thinks all the effort is worth it. After all, she entered pageantry to grow as a person through all the life skills and lessons pageant life brings.

“There’s no balance right now just because I think you have one year to take full advantage of all the opportunities that are given to you,” Smith said. “And so I am full-fledged trying to go 24/7, which is exhausting at times, but it’ll be so worth it next year when I pass down the crown and I’m like I took advantage of every single opportunity that was given to me over the past 365 days.”

Fayette County has had 1,150 students test positive for COVID-19 since Jan. 18

Pelosi to seek reelection with Democratic majority at risk