18-year old Elijah Carter, of Richmond, allegedly pointed a loaded rifle at the victim and threatened to shoot her

RICHMOND, Ky. (WTVQ) – Two young men in Richmond are accused of sexually assaulting an underage girl in an apartment and one of the suspect’s allegedly pointed a loaded rifle at the victim and threatened to shoot her, according to court documents cited by the Lexington Herald-Leader.

The report says 18-year old Elijah Carter, of Richmond and 20-year old Thomas Binford, of Louisville, went into a bedroom the reported victim was sitting in, turned off the lights, locked the door and sexually assaulted her on Nov. 12, 2021.

After the alleged assault, Carter and the victim got into an argument at which time Carter allegedly pointed a loaded rifle at her and threatened to shoot her, according to the report.

Carter and Binford were arrested the next day.  Carter was charged with first-degree rape, first-degree wanton endangerment, kidnapping and buying/possessing drug paraphernalia, according to the report.

Binford was charged with first-degree sodomy, third-degree criminal mischief and resisting arrest, according to jail records cited in the report.

While at the Madison County Detention Center, Binford became irate and punched a hole in the drywall of the interview room, according to the report. 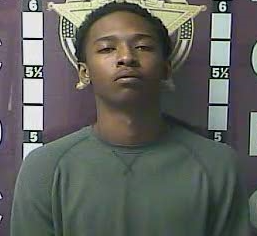