FRANKFORT, Ky. (WTVQ) – Two new coronavirus cases – one in Fayette and one in Jefferson counties – have been confirmed in Kentucky, Gov. Andy Beshear announced Thursday evening in his daily update.

The governor also recommended all school districts not have in-school, in-person instruction for at least the next two weeks. Beshear said the recommendation has flexibility to allow districts to continue to serve meals and some other services that are critical to many students.

The two new patients bring to 10 the number of cases in the state.

One is isolated in a hospital and one is isolated at home, he said. The new numbers mean five in Harrison County, and two each in Fayette and Jefferson counties.

Dr. Steven Stack, commissioner of the Department of Public Health, used the experience in Seattle, Wash., to explain the reasons behind the steps the state has taken proactively to try to minimize social interaction.

In Seattle, failure to limit interaction early on led to the spread of the disease. Limiting action even 25 percent would have cut cases of the disease in half, according to the study conducted by Washington state health experts. 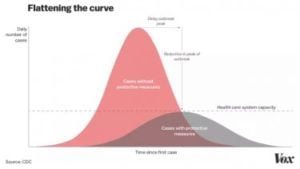 “If we do them quickly, it’s the best chance to let this not take hold in Kentucky,” Stack said.

“What we are doing is absolutely necessary to protect the most vulnerable,” Beshear added.

The process of limiting interaction and thus curbing the spread of the disease is called “Flattening the Curve.”