KSP believes the fire was accidental

MOREHEAD, Ky. (WTVQ) – According to the Morehead Fire Department, a call came in just after 7 Tuesday morning for a shed and RV that had gone up in flames. After the fire had been put out, KSP says firefighters discovered the bodies of two teenagers inside.

KSP says the remains were sent to the State Medical Examiner’s office to be identified. KSP says it believes the fire to be accidental and could be related to propane usage, but the cause is still under investigation.

The fire department says the shed appeared to be a temporary residence as there was a bed and heating unit, but no running water or smoke detectors. Morehead fire says the call came in from the owner of the property who was alerted to the fire after her dog started barking.

“We know that there’s buildings around that will have this type of housing or people will be staying in them temporarily but we don’t see this very often,” says Chief Jeff Anderson with Morehead Fire Department. “That’s the biggest thing I can tell you is if you don’t have smoke detectors, please come and see us.”

On social media, Rowan County Coroner John Northcutt identified the two victims as 18-year-old Charles “Charlie” Meade, who lived on the property, and 17-year-old Deegan Beane, a senior at West Carter High School who was visiting.

They died of smoke inhalation, according to Northcutt.

After the fire was extinguished, firefighters discovered two sets of human remains inside the burned residence, the KSP said in a statement. The human remains could not be identified and have been sent to the State Medical Examiner’s Office for identification.

According to state police, a home off of Pretty Ridge Road off Highway 519 south of Morehead caught fire Tuesday morning. State police say the fire has been put out. 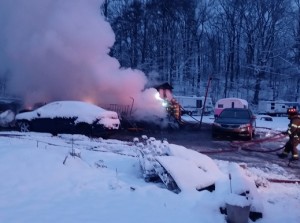 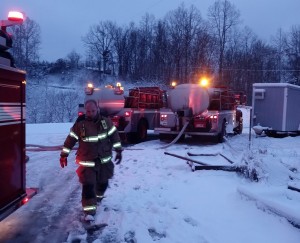 State police believe the cause of the fire is accidental, and don’t believe there are any other bodies still in the home.

According to state police, the bodies are being sent to the State Medical Examiner’s Office in Frankfort for identification. Their names will be released after kin is notified.