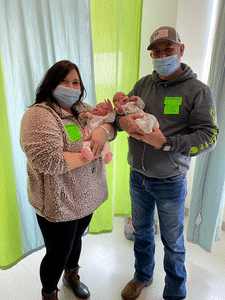 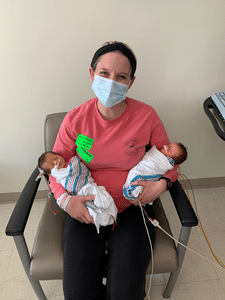 hospital of choice for generations of mothers and babies in the region, Baptist Health Lexington has been known for its exceptional maternity care since it opened in 1954.

Bringing joy to an unprecedented time spent fighting a pandemic, 2021 is off to a doubly happy start with 17 sets of twins born since January.

While there has been speculation about birth rates going down during the pandemic, births at Baptist Health Lexington are up, with a 3% increase over last year at this time.

“It’s a blessing for our staff to care for all of these tiny rays of hope for the future,” said Bill Sisson, president of Baptist Health Lexington.

Amanda and Josh Barker of Morehead welcomed a son and a daughter on Friday, March 5. Everyone was healthy and by that Sunday, twins Mahala and Malcom were already at home getting to know big brother A.J., 16, who was thrilled to have his new siblings join the family. “He loves it,” said Amanda. “And they love him.”

The babies were named for members of Amanda’s family, “My grandma’s dad’s name was Malcolm and my grandma’s grandma’s name was Mahala,” she said. “They’re really good babies, I’m really thankful.”

Twins are more likely to be born premature, and the hospital’s neonatal intensive care unit (NICU) has cared for several of the babies born this year. The unit has 32 private rooms, including ones specially designed to hold twins or triplets, so parents can care for and bond with their babies.

Marquita and Roger Ratliff of Georgetown are settling in at home with twin daughters Aubrey and Ainsley, who were born on Jan. 29. The babies stayed in the NICU until going home on Feb. 26. While they are the couple’s first children together, Marquita and Roger have children in their 20s from previous marriages. So, it’s been a while since they’ve had little ones at home. “It’s going good, a lot of adjustments and not much sleep. But we’re doing it,” said Marquita.

Lindsay and TJ Wilson of Pike County have a history of twins on both sides of their family. Lindsay gave birth to their own twins, Elena and Eliza on Feb. 4. While still in the NICU in Lexington, the babies are developing and gaining weight, says Lindsay. TJ helped to name the girls. “We just wanted names that you never hear anymore,” said Lindsay. “And he actually came up with Eliza and I came up with Elena for the other E name.”

Kacie and Seth Brogle of Stanford are parents to Heidi and Hollyn, born on Feb. 19. While the girls remain in the NICU, they’re doing great says Kacie. And for their two-year-old brother Sawyer, life at home goes on as usual. For now. “With them not being there, his little world really hasn’t changed that much,” said Kacie with a laugh. “He still lives life normally. His little world is about to be rocked.”

But Sawyer has known all along that twins were on the way, even before his parents. From the beginning he would tell his mother that she was having two babies, not one. “We went for the ultrasound and, sure enough,” said Kacie. “I think the Lord and Sawyer must have had a talk and it’s like he just knew.”