DANVILLE, Ky. (WTVQ) – A 30-year-old Danville woman is charged with 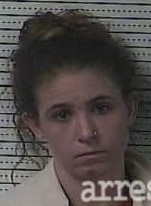 trafficking in heroin and marijuana following a traffic stop.

According to the Boyle County Sheriff’s Department, Clarissa Yankey was arrested after the department’s K9 ‘Aja’ indicated drugs were in her car when it was stopped by K9 Deputy Tanner Abbott and Deputy Braydon Hopper on Dillehay Street in Danville.

She remained in the Boyle County Detention Center Monday morning.