The driver was identified as Bobby Wayne Waldridge from Springfield, Kentucky. According to the coroner’s office, Waldridge was 56 years old.

His body has been taken to the state medical examiner’s office for autopsy. No cause or manner of death has been released at this time.

UPDATE (5/31/22) – Transportation officials say I-64 East in Montgomery County is back open after a semi crash around 1 P.M. near mile marker 105 closed the interstate for several hours.

Lexwrecks reports as of 7:30 p.m. the scene has been cleared.

MONTGOMERY COUNTY, Ky. (WTVQ) – Drivers are asked to find an alternate route after a crash on I-64 East in Montgomery County at the 105 mile marker that’s expected to be shutdown for several hours.

According to the Kentucky Transportation Cabinet, the highway could be closed for up to six hours.

Montgomery County Emergency Management says I-64 East is closed at mile marker 101 after a semi crashed. According to emergency management, no other vehicles are involved. No word on any possible injuries but the crash is being described as “serious”.

The Montgomery County Sheriff’s Office says every deputy is currently on scene trying to assist.

Emergency management says right now they’re in the process of trying to get vehicles off the highway and then start working on the semi. It is not a Hazmat situation.

Traffic is being detoured at exit 101 until further notice. 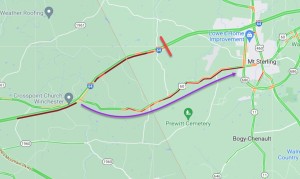