Steve Rogers,
UPDATE POSTED 8 A.M. JULY 10, 2021
MIDWAY, Ky. (WTVQ) – Police now have a picture and more information of the truck driver suspected of backing into a Tennessee man at the I-64 rest stop in Midway three weeks ago, leaving the man critically injured.
Versailles Police have released video of the suspected trucker and other information. He had a passenger with him in the front seat.
A GoFundMe account also has been set up to help Gerald Sapp and his family with medical expenses.
“He has undergone over three different surgeries that have added up to approximately 30 hours! Please pray for no more complications! He is still in Kentucky in the hospital!” Sapp’s daughter, Angela Taylor said in an update on her dad’s condition.
“Someone has to know something and the fact that there were two people in this truck is just appalling! How can someone else know something and not come forward?! You hit something! You hit somebody! You hit my dad. You left him laying in a hospital out of state fighting for his life,” an emotional Taylor continued.
Sapp is in UK Medical Center.
The truck is a Freightliner Cascadia, from between 2008-2018. It has a grey or black possible replacement bumper on the front. It also has no fuel tank covers or satellite on the back. It is a 53-foot dry van with no locks on it. There was damage to it. The tag of this trailer was bent up underneath the back of it on the left side, according to the police description.
Anyone with information is asked to call Versailles Police.

MIDWAY, Ky. (WTVQ) – Versailles Police have released video of the 18-wheeler suspected of smashing into a Tennessee man June 22, 2021, pinning him between his truck and trailer, causing critical injuries.

The video, captured on another truck’s dash cam, shows the non-descript white semi and trailer backing up and then pulling out of the I-64 rest stop in Midway. In the rearview mirror of the truck with the dash cam, the other truck can be seen hitting Gerald Sapp’s white pickup and pushing it backwards.

At the time, Gerald Sapp was behind his truck checking a trailer he was towing to Kentucky 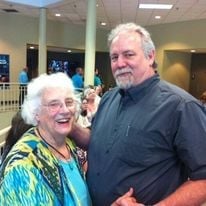 to possibly buy a car and return to Tennessee. As his truck was pushed backward, the trailer jackknifed, pinning Sapp, seriously injuring his hip and legs.

He underwent more than 22 hours of surgery and still is in intensive care at UK Medical Center.

“His condition hasn’t changed much. He is still in ICU and he is still in that ‘waiting period’ to see how his body handles all of the trauma from the 22 hours of surgery. We’re hopeful in the next day or so that he will be alert enough to talk with us! When he does become slightly coherent, he is in immense pain,” said Sapp’s daughter, Angela Taylor.

Anyone with any information regarding this collision, or possibly the identity of the truck driver, is asked to contact Versailles Police Sgt. Anthony Conner at 859-873-3126.

MIDWAY, Ky. (WTVQ) – A man seriously injured last week when an 18-wheeler backed into his truck, trapping him against a trailer, has undergone more than 22 hours of surgery with much more to come, according to his daughter.

Meanwhile, the truck and driver involved still are being sought.

According to Angela Taylor, of Morristown, Tenn., doctors were able to pin Gerald Sapp’s his pelvis back together and put rods in both of his femurs. He had to remain on a ventilator because of complications for a bit longer than they would have liked, and doctors are waiting until this coming week to finish up his surgeries, she said in an update Monday.
Apparently Sapp’s truck had its E-brake on and the trailer turned jack-knifed when it was pushed backward by the semi truck. He was hit hard enough that it pushed the fan/radiator back into the motor of his truck, Taylor described.
Law enforcement think the trailer on the semi had to have suffered damage that would be noticeable. Taylor said according to bystanders, two other semi trucks came through the rest stop on I-64 in Woodford County as the accident was happening. One drove by when it was happening and the other one drove by after it happened. The family hopes to find those two trucks in an effort to find the actually truck involved in the incident.
“The truck that hit my Dad was on the scene for several hours before my Dad showed up, so someone else could have seen him there. If anyone was in that area hours before then and they think that they have dashcam footage we’re asking them to come forward,” Taylor said, noting the Woodford County Sheriff’s Department is handling the investigation.
A GoFundMe account has been set up for Sapp: https://gofund.me/6a3674e3
Sapp remains in in ICU in the trauma/surgical unit at the UK Medical Center. Doctors have told the family the recovery will be at least six months, Taylor said.

MIDWAY, Ky. (WTVQ) – A man is fighting for his life at UK hospital after a tractor trailer backed into him at an I-64 rest stop in Midway and then drove off.

According to the Versailles Police Department, 67-year-old Gerald Sapp pulled his pickup truck over to check the oil at a rest area.

At the same time a tractor trailer was backing out and trapped him in between the truck and the bumper of his vehicle.

Police say the driver then drove away and left Sapp with serious injuries.

Right now investigators are looking at some dash cam video from another truck that was in the area.

The family says they’re not giving up easily while Sapp recovers.

“He crushed my dad he’s got blood on the back of his truck and I’m going to find him. I’m not going to stop until I find him,” says Angela Taylor, Gerald Sapp’s daughter.

Police say they’re looking for a white cab and white trailer that had been traveling westbound on I-64.

Witnesses are asked to contact the Versailles Police Department with any information.