Strong-to-severe storms in the forecast Tuesday

Heavy showers and storms impacted the northern portions of the ABC 36 viewing on Tuesday morning. As these showers and storms exit northward, warm and humid conditions will set the stage for the chance of severe weather later in the day. Late morning and early afternoon conditions will remain calm. The amount of sunshine during this time will be big factor on how much severe weather will be possible later in the day. More cloud cover in the late morning and early afternoon will result in lower risk of severe weather. While, more sunshine will help fuel storms and give us a higher risk of severe weather. 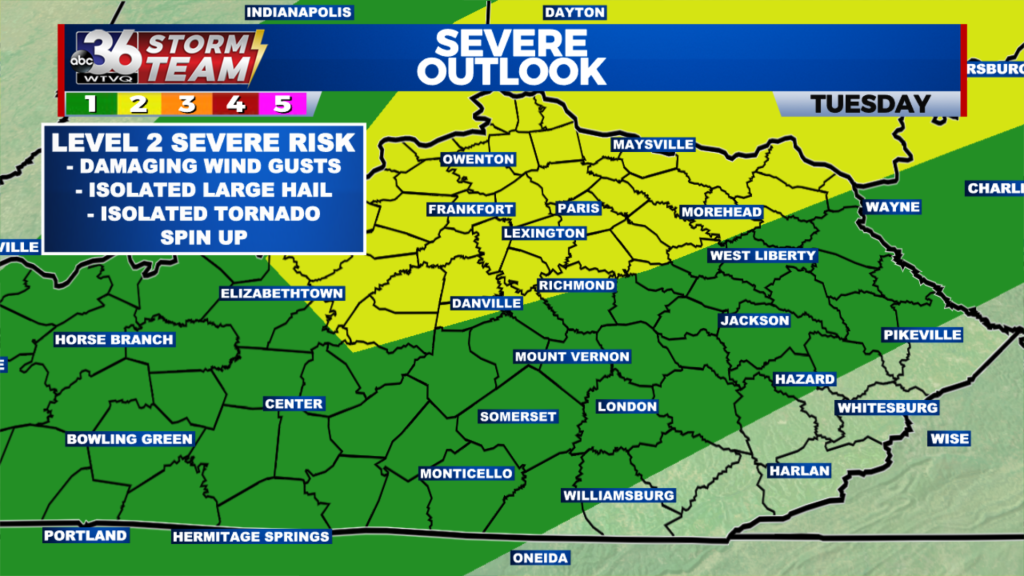 TIMING: Tuesday afternoon through the evening. The severe storm will subside from west to east late this evening as the cold front passes through.

IMPACTS: Damaging Wind Gusts will be the primary threat. Large Hail and an Isolated Tornado could be possible as well. Heavy rainfall and frequent lightning will accompany many of the storm that develop.

As a cold front exits eastward overnight, cooler conditions are on the way for Wednesday. Afternoon highs will struggle to reach the upper 60s and skies will remain cloudy for the first half of the day. Our next system is forecasted to move into the region late Thursday into Friday. This will bring us another chance of showers and storms just in time for Kentucky Derby weekend. Below average temperatures are also likely for Derby Saturday. Follow along with the ABC 36 Storm Team for more details.