UPDATE: Suspect talked out of house

UPDATE: FRANKFORT, Ky. (WTVQ)- The Franklin County Sheriff’s Office has talked the suspect out of the house.

Deputies say Larry Thomas Engler and a woman whose name is unknown have been arrested.

Deputies found a knife and a pellet gun in the home.

UPDATE: FRANKFORT, Ky. (WTVQ)- The Franklin County Sheriff’s Office has confirmed the second suspect in a burglary case has barricaded himself inside a home on Holmes Street.

Deputies say SWAT is on scene.

The Franklin County Police Department is saying to avoid the area of Wallace Avenue, between Wright Street and Chinn Street. This request is a precaution only

We will continue to update you as we receive new information.

FRANKLIN COUNTY, Ky. (WTVQ) – Several guns stolen in a burglary in Franklin County have been found.

Deputies say 12 firearms were stolen as well as a iPad.

They say one suspect, 32-year-old Zackary Harrod, was arrested after a foot chase at a nearby neighborhood. 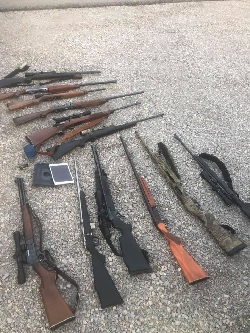