Almost 2,300 people in the hospital with COVID-linked reasons 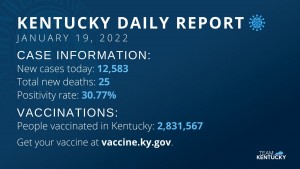 patients and people on ventilators all also reached new highs.

In the state’s daily update Wednesday (click here), Gov. Andy Beshear announced 12,583 newly reported cases, 25 deaths and a record positivity rate of 30.77%, which was up a half percent from Tuesday’s 30.25%.

“Hospitals are struggling, and some have declared crisis standards for staffing,” said Dr. Steven Stack, commissioner of the Kentucky Department for Public Health. “More than 450 Kentucky National Guard women and men are currently supporting the COVID-19 response in health care facilities. Thank you to all of our health care professionals who keep showing up to help others even under these circumstances.”

He continued: “There could be some light ahead. If Kentucky follows the pattern of Rhode Island and New York. Both Rhode Island and New York are showing a rapid decline in new cases that appears to mirror the immediately prior vertical climb. If Kentucky follows this pattern, then we may see our own peak within the next one to two weeks. This would be a very welcome reprieve. Until then, I urge all Kentuckians to not go to an ER just to get a COVID test.”

Dr. Stack said the one monoclonal antibody treatment effective against the omicron variant, as well as the Pfizer antiviral medication, are not yet widely available, but vaccines and boosters are abundant and highly effective.

Transylvania to honor more than 200 graduates at commencement ceremony Saturday