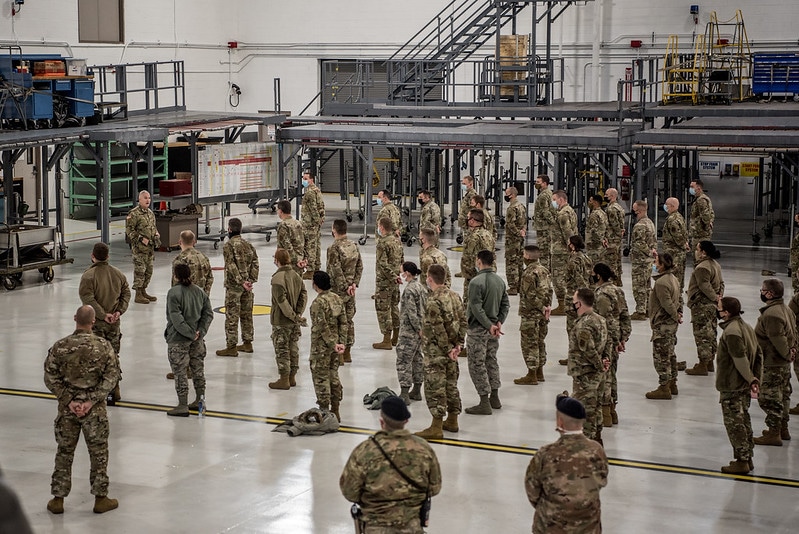 FRANKFORT, Ky. (WTVQ) – The Kentucky National Guard will send approximately 270 personnel to the National Capitol Region this weekend to assist civilian law enforcement with security operations leading up to the Presidential Inauguration on Wednesday, Jan. 20.

The Soldiers and Airmen will assist in protecting property and providing a safe environment for citizens to exercise their right to peacefully assemble and protest. These Guardsmen will begin leaving the Commonwealth in the next several days and will be on duty in and around Washington, D.C., through the inauguration.

In addition, state Guardsmen also are being activated to serve next week in Frankfort in advance to fears of violence at the state Capitol surrounding the inauguration of President-elect Joe Biden.

The FBI has issued notices nationwide of potential incidents at state capitols associated with the inauguration as a continuation of Jan. 6 violence in Washington D.C.

“We’ll be ready,” Gov. Andy Beshear said during his daily briefing Thursday, noting the state does not want to give out “too many details” of plans.

“We can’t play patty cake” with these people, he said, citing lessons learned from 9-11 almost 20 years ago and incidents since then, including last week in the national capital.

“We are going to stand up to domestic terror,” Beshear said of both activations. “We will insure that what happened in the Capitol doesn’t happen here.”

“The brave men and women of the Kentucky National Guard will once again proudly serve the commonwealth and the country in the coming days as they assist in and around Washington, D.C., during the presidential inauguration,” Beshear continued. “The peaceful transfer of power is crucial to our democracy. After the Jan. 6 attack on the U.S. Capitol and lawmakers, it is necessary that we ensure safety and security. I was proud to authorize this request for aid and am proud our soldiers and airmen will take part in the mission.”

According to Brig. Gen. Hal Lamberton, the Adjutant General of Kentucky, the Service members will have a variety of roles and responsibilities, to include support to civil authorities for immediate response capabilities, food service assistance and chaplain care.

“Our Guardsmen will help provide much-needed support to the nation as we swear in a new president Wednesday,” said Lamberton. “Our Soldiers and Airmen are of the highest caliber, and it’s my honor to be able to provide them an opportunity to serve in this capacity.

“We are grateful to the families and employers of these service members as well. We couldn’t be successful without their unwavering support for all of our missions.”

Many states in the nation are providing some type of support to the Inauguration, with thousands of Guardsmen scheduled to be in attendance.

Soldiers and Airmen assisting the Inauguration will remain under the control of the Kentucky governor under Title 32, 502 (f) orders. Civilian law enforcement officers are responsible for the safety and security of all personnel, and the National Guard will provide assistance as requested.

In a memorandum published Tuesday, Jan. 12, to the U.S. military, the Joint Chiefs of Staff wrote, “The American people have trusted the Armed Forces of the United States to protect them and our Constitution for almost 250 years. As we have done throughout our history, the U.S. military will obey lawful orders from civilian leadership, support civil authorities to protect lives and property, ensure public safety in accordance with the law, and remain fully committed to protecting and defending the Constitution of the United States against all enemies, foreign and domestic.”