FRANKFORT, Ky. (WTVQ) – The Republican Party of Kentucky says a sign in front of its headquarters in Frankfort was vandalized Friday.

The spokesman for the party, Tres Watson, tweeted a photo of a sign covered in red spray paint in front of the Mitch McConnell Building on Capitol Avenue in downtown Frankfort.

In his tweet, Watson indicated he believed it was a teacher that was behind the vandalism.

“Too bad one bad apple has to give the other teachers here a bad name,” he tweeted.

Thousands of teachers are holding a rally in Frankfort for education funding and to protest the newly-passed pension law. 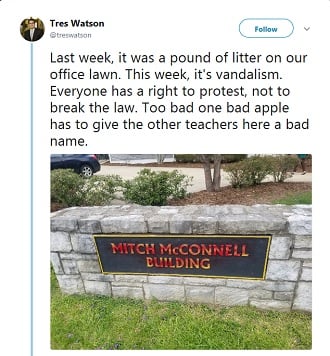