CAMPBELL COUNTY, Ky. (WTVQ) – An 18-wheeler got clipped by an SUV, sparking a fire that 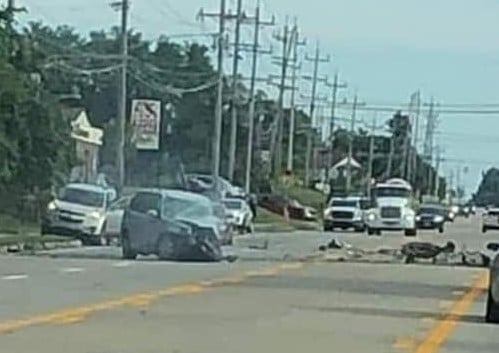 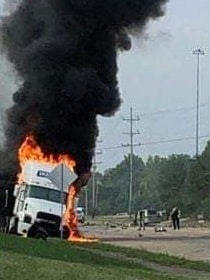 shut down busy Highway 27 in Alexandria in Campbell County along the Ohio state line much of the day and even damaged plastic storm drains that were burned by leaking fuel that caught fire.

The accident happened Friday morning at Highway 27 northbound at Paul Lane, according to the Kentucky Transportation Cabinet.

The driver of a northbound 18-wheeler on Highway 27 told first responders he saw a van cut into his lane, striking his left saddle tank which caused him to swerve onto the sidewalk.

His saddle gas tanks ruptured ad caught fire as well as spilling burning fuel into the drainage system, according to a transportation cabinet summary.

Both saddle tanks of the CMV had been ruptured, draining into the storm drain which was on fire. Two drains South of the CMV had 30-foot flames shooting from them and heavy black smoke. The tractor/trailer was hauling wood which both where on fire,” the summary said.

The storm drains are plastic and were damaged and collapsed due to the fire.

The driver was not injured and refused treatment.

Once the fires were extinguished, clean up began, including removing the fuel that did not burn and hauling off the wood. Detours were set up for both northbound ad southbound traffic.

Those were finally cleared at about 2:30 p.m. Friday afternoon, according to the transportation cabinet.

Big Twin Creek bridge in Owen County to be replaced

Deadline to apply for health insurance programs is Jan. 31