LEXINGTON, Ky. (WTVQ) – Sixx new inductees have been announced for the 20th anniversary of the Kentucky Pro Football Hall of Fame.

The board of directors unveiled the list Thursday morning. The induction events are June 22-24 and the induction ceremony will be broadcast on WTVQ ABC 36 at 8 p.m. June 23. 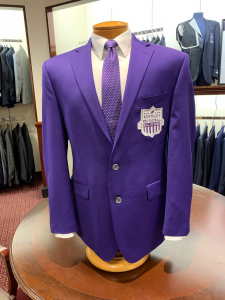 Bluegrass. In honor of our 20th anniversary, all the Hall of Famers who attend the June 23, 2022 event will be presented with a custom made “Purple Blazer” adorned with a Kentucky Pro Football Hall of Fame patch.

Why the color purple? The directors said throughout history, the color represented the highest honor in society: Royalty, Spiritualism, Creativity and Mystery and “epitomizes the true nature of our current and future HOF’ers.   Starting today the color PURPLE will be associated with our organization to ensure all HOF’ers will be associated with the traits worthy of this noble color,” the board said in a statement.

Randall Ladonald Cobb II (born August 22, 1990) is an American football wide receiver for the Houston Texans of the National Football League (NFL). He played college football at the University of Kentucky, and was drafted by the Green Bay Packers in the second round of the 2011 NFL Draft.

Cobb was born to Randall Cobb Sr. and Tina Cobb. Randall Sr. worked at the Denso car parts factory in Maryville, Tennessee and also worked side jobs in the evenings, ranging from installing ceramic tile floors to mowing lawns and plowing snow, with young Randall II helping. Tina, who was a track star in high school, later worked at Denso, where she met Randall Sr.[1]

Cobb attended Alcoa High School in Alcoa, Tennessee, where he was a letterman in football, basketball, and track.[2] His football team was a four-time State Champion in Class AA and Cobb received a “Mr. Football” trophy from the Tennessee Secondary School Athletic Association.[3] At that time, he played both offense and defense as well as special teams but made his biggest impact as quarterback for the Tornadoes. He was an All-District basketball player as a junior, playing for Micah Marsh.

rn March 14, 1981) is a former American football safety. He was signed by the Detroit Lions as an undrafted free agent in 2004. He played college football at Arkansas. Wilson was a longtime player for the Buffalo Bills and also played for the Tennessee Titans.Wilson played high school football for Paducah Tilghman High School in Paducah, Kentucky. He twice was named all-state and was honorable mention All-America as a senior. He was also named all state in basketball, and lettered in baseball and track as well. During his high school football career, Wilson had 81 catches for 1,723 yards and 24 touchdowns. Wilson played in the Kentucky-Tennessee All-Star Game.Wilson was signed by the Detroit Lions on April 30, 2004 as an undrafted free agent.Wilson was signed by the Buffalo Bills to their practice squad on October 18, 2004, and played his first regular season game on September 11, 2005 against the Houston Texans. Up to the 2007 season, he had played in only three games in his NFL career and never recorded a reception.[3] For the 2007 season, Wilson made the transition to strong safety, a position at which he had never played in an organized game.[4]On October 8, 2007 on Monday Night Football, he intercepted Tony Romo and returned it for a touchdown in his first NFL start. His 2007-2008 season ended with a rib injury on December 10, 2007 in a game against the Miami Dolphins in which he returned a fumble for a touchdown.In the 2008 season, Wilson played in all 16 games for the first time in his career. He shared a sack of New England Patriots Matt Cassel with Marcus Stroud at New England on November 9, 2008. The play marked his first career participation in a sack. He also recovered the fumble forced by Stroud on the same play, marking his second career fumble recovery. Wilson had a season-high four tackles, including one for a loss of five yards, a sack, and recovered a fumble at KC. He finished third on team with 15 special teams tackles. He was voted special teams captain prior to the season, and has been voted consecutively as team captain for seasons since.Wilson is the first Buffalo Bills defensive back to post consecutive multi-sack seasons since Lawyer Milloy (2003–04) and the only second Bills defensive back to accomplish the feat

Reginald “Reggie” Terrell Swinton (born August 24, 1975) is a former American football wide receiver and return specialist in the National Football League for the Dallas Cowboys, Detroit Lions and Arizona Cardinals. He played college football at Murray State University.Swinton attended Central High School and received All-State honors in football, basketball, baseball and track.He received a scholarship to play college football for Murray State University under head coach Houston Nutt. He was the first Murray State player to amass more than 1,000 receiving yards in a season (1,042) and was selected All-Ohio Valley Conference and second-team Division I-AA All-American in 1996. As a senior, he finished with 35 receptions for 642 yards.

Swinton has a blended family and is married to Patricia Walker-Swinton. They have four children: Craig Steele (CJ), Sydney Steele, Ryan Swinton, and Reggie Swinton, II. Swinton was signed as an undrafted free agent by the Jacksonville Jaguars after the 1998 NFL Draft on May 21. He was waived on August 25.[1]

His pro career began in February 1999 in the Canadian Football League (CFL) with the Toronto Argonauts, who in March traded him along with quarterback Kerwin Bell to the Winnipeg Blue Bombers in exchange for Eric Blount, wide receiver Mitch Running and two players on Winnipeg’s negotiation list.[2] The Blue Bombers signed him on July 13, only to be released on August 2. He was re-signed on August 9 and cut again on August 16. During his time with the team he ranked 10th in the CFL in kickoff returns with a 25.8-yard average and one touchdown. On September 13, 1999, he signed with the Edmonton Eskimos of the CFL, but was released on October 12.

Steve Ortmayer is a former American football player, coach, and executive. He has served as the general manager of the. National Football League‘s San Diego Chargers and St. Louis Rams.

Ortmayer grew up in Nashville, Tennessee and Dallas, Texas. He played one season at Vanderbilt University before transferring to the University of La Verne and playing three seasons there.

Ortmayer got his start in coaching at the University of Colorado at Boulder in 1967 and also spent a season at Georgia Tech. From 1968 to 1973, he was assistant head coach, offensive line coach, and defensive line coach for Colorado. In 1974, he was assistant head coach and offensive line coach for the Georgia Tech Yellow Jackets. After one year with the Yellow Jackets, Ortmayer moved on to the National Football League (NFL) to be the special teams coach of the Kansas City Chiefs from 1975 to 1977. Ortmayer spent 25 seasons in the NFL and won two Super Bowl rings as special teams coach with the Oakland/Los Angeles Raiders. In 2003, he became assistant head coach, special teams coordinator, and tight ends coach at the University of Kentucky. Ortmayer has coached in five college bowl games and for eight NFL playoff teams, in addition to his two Super Bowl wins with the Raiders.

In 1987, Ortmayer moved to the San Diego Chargers as general manager where he served until his release in December 1989. He then rejoined the Raiders until moving to an administrative office with the Los Angeles Rams. With the Raiders, he served in a number of capacities ranging from assistant coach to Director of Football Operations. Ortmayer was on the sidelines when the Raiders won both Super Bowl XV and Super Bowl XVIII. In 1995, as Vice President of Football Operations of the Rams, Ortmayer oversaw the move from Los Angeles to St. Louis. In 2000, Ortmayer was named Director of Player Personnel of the XFL‘s Memphis Maniax.[1]

Lee Calland (born September 14, 1941 in Louisville, Kentucky) is a former football player, a defensive back for ten seasons in the NFL. In 1968, his last of three years with the Atlanta Falcons, he helped seal the victory with an interception off Fran Tarkenton of the New York Giants late in the 4th quarter, one of only 2 victories for the Falcons all season, losing 12, in their 3rd year of existence. Out of the University of Louisville was the first rookie to ever start at the position of cornerback in the NFL when he joined the Minnesota Vikings in 1963. In 1963 made all-rookie team. Lee Calland serves as the defensive ends coach after joining the Tennessee State staff in 2008 as the defensive back coach (safeties). Calland brings more than 30 years of coaching and playing experience. Before joining the staff, Calland served as the defensive coordinator at Fort Valley State from 1997 – 2000. He helped lead the Wildcats to two NCAA Division II playoff appearances and in 1997, his defense was ranked first in the Southern Intercollegiate Athletic Conference (SIAC).

In 1996, Calland coached the linebackers for the World Football League’s London Monarchs. Prior to his service with the Monarchs, Calland held coaching stints with Morehouse College, Southern University and Morris Brown College.

Calland played in the professional ranks for 10 years. He began his professional playing career as a defensive back with the notorious Purple People Eaters of the 1963 Minnesota Vikings. He was named to the All-Rookie Team at the end of the season.

After leaving the Vikings in 1966, Calland became a member of the Atlanta Falcons, spending three seasons before joining the 1969 Pittsburgh Steelers’ Steel Curtain Defense. He later retired from the NFL in 1972 due to an injury.

Coach Calland is a 1963 graduate of the University of Louisville where he received a B.S. in History. He and his wife, Elvina, have three children and four grandchildren

Nickel starred in three sports at the University of Cincinnati – he was an end on the football team, a top scorer on the basketball team and a pitcher–outfielder in baseball. His education was put on hold by Army service in World War II.[1]

Generally considered one of the best tight ends in Steelers’ history,[2][3] Nickel recorded 329 career receptions as a tight end and is now second in career receptions by a Steelers’ tight end behind Heath Miller (490). In conjunction with the 2007 celebration of the 75th anniversary of the Steelers, Nickel was selected as one of 33 players on the Pittsburgh Steelers All-Time Team.