WASHINGTON (ABC) – The months-long impeachment and Senate trial of President Donald Trump came down to an anticlimactic end Wednesday afternoon with acquittal on both articles.

But there was drama on the Senate floor when each senator’s name was called, and standing at their desks, they pronounced Trump “guilty” or “not guilty” as required by Senate rules on each of the two articles alleging “abuse of power” and “obstruction of Congress.”

The Constitution requires “[N]o Person shall be convicted without the Concurrence of two-thirds of the Members present.”

Trump is only the third president in U.S. history to face an impeachment trial, but largely because Republicans have a 53-47 advantage in the Senate, his fate has been mostly a foregone conclusion since even before the proceedings began.

Earlier Wednesday, in a dramatic moment on the Senate floor, Utah Republican Mitt Romney announced he would vote to convict Trump, the first to break ranks with his party and the first senator ever to say he would find a president of his own party guilty.

The Senate votes to acquit Trump on the second article of impeachment — obstruction of Congress — by a vote of 53-47.

“It is, therefore, ordered and adjudged that the said Donald John Trump be and he is here by acquitted of the charges in said articles.”

Chief Justice John Roberts announces that the Senate has voted to acquit President Trump on the first article of impeachment — abuse of power — by a vote of 52-48.

“The Framers predicted that factional fever might dominate house majorities from time to time,” Senate Majority Leader Mitch McConnell says in the final floor speech before the Senate vote.”They knew the country would need a firewall to keep partisan flames from scorching, scorching, our republic. So, they created the senate. Out of necessity, James Madison wrote, of some stable institution in the government. Today we will fulfill this founding purpose. We will reject this incoherent case that comes nowhere near justifying the first presidential removal in history. This partisan impeachment will end today. But I fear the threat to our institutions may not,” McConnell says.

He continues, “Because this episode is one of a symptom of something much deeper. In the last three years, the opposition to this president has come to revolve around a truly dangerous concept,” McConnell says. “Normally when a party loses an election, it accepts feat. It reflects and retools. But not this time.”

“I must vote yes on the articles of impeachment. I take no pleasure in these votes, and am saddened this is the legacy we leave our children and grandchildren,” Manchin, from the red state of West Virginia, says in a statement just before the Senate votes.

ABC News’ Mariam Khan reports from Capitol Hill: “Today, I vote to approve both articles, as my highest duty, and my greatest love, is to our nation’s Constitution, Democrat Kyrsten Sinema, from the red state of Arizona, announces in a statement.

“The facts are clear; security aid was withheld from Ukraine in an attempt to benefit the president’s political campaign. While White House attorneys claim this behavior is not serious, it is dangerous to the fundamental principles of American democracy to use the power of the federal government for personal or political gain. Worse, they failed to assure the American people that this behavior will not continue and that future national security decisions will be made free from personal interests,” Sinema says.

“The president sought to cheat the people out of a free and fair election,” Schumer argues.

Invoking the Founders, Schumer says, “Madison was right. Washington was right. There is no greater subversion of our democracy than for powers outside of our borders to determine elections within them. If Americans believe that they don’t determine their senator, their governor, their president, but rather some foreign potentate does, that’s the beginning of the end of the democracy,” he says.

“The verdict of this kangaroo court,” he says, is “meaningless.”

Schumer goes through a list of what he calls “Dershowitzian arguments” which Schumer says “are the excuses of a child caught in a lie. Each explanation more outlandish and desperate than the last. It would be laughable — if not for the fact that the cumulative effect of these arguments would render not just this president but all presidents immune from impeachment and therefore above the law.”

“Alone, each of the defenses advanced by the president’s counsel comes close to being preposterous. Together they are as dangerous to the republic as this president, a fig leaf so large as to excuse any presidential misconduct. Arguments were found to make him a king.”

“Let future generations know that only a fraction of the senate swallowed these fantasies. The rest of us condemned them to the ash heap of history. And the derision of first-year law students everywhere,” he continues.

Earlier Wednesday — there was a partial answer to one of the few remaining open questions: whether any Democrats from red states where Trump is popular will side with the GOP majority on acquittal, which would allow the president to claim a bipartisan “exoneration.”

Democratic Sen. Doug Jones of Alabama announced he would vote to convict Trump on both articles of impeachment Wednesday morning.

“After many sleepless nights, I have reluctantly concluded that the evidence is sufficient to convict the President for both abuse of power and obstruction of Congress,” he said in a statement and then elaborated in a floor speech. “I will not shrink from my duty to defend the Constitution and do impartial justice,” he said.

Democratic leaders have argued that, because the Senate voted again their demands for witnesses and other other evidence, that the trial was not “real” and therefore an acquittal vote is meaningless.

As senators on Wednesday continued to make floor speeches explaining how and why they intended to vote, Democrat Kyrsten Sinema of Arizona had yet to be heard from.

Democrat Joe Manchin of West Virginia was asked by reporters whether he would say more before the vote after proposing Monday that his fellow senators consider censuring Trump instead of convicting him, but his idea has gained little, if any, support in the GOP-controlled Senate.

He brushed off reporters’ attempts to learn how he’ll vote on acquittal, telling them they would “find out at 4 p.m. today.”

He said he hasn’t let anyone in leadership know how he’ll vote and criticized reporters for asking. “Do you know where I’m from?” he asked one reporter.

“I agonized. It’s been very difficult for me. “I feel very strong about the decision I will make. It’s going to be a very, very personal decision. It’s very difficult.” 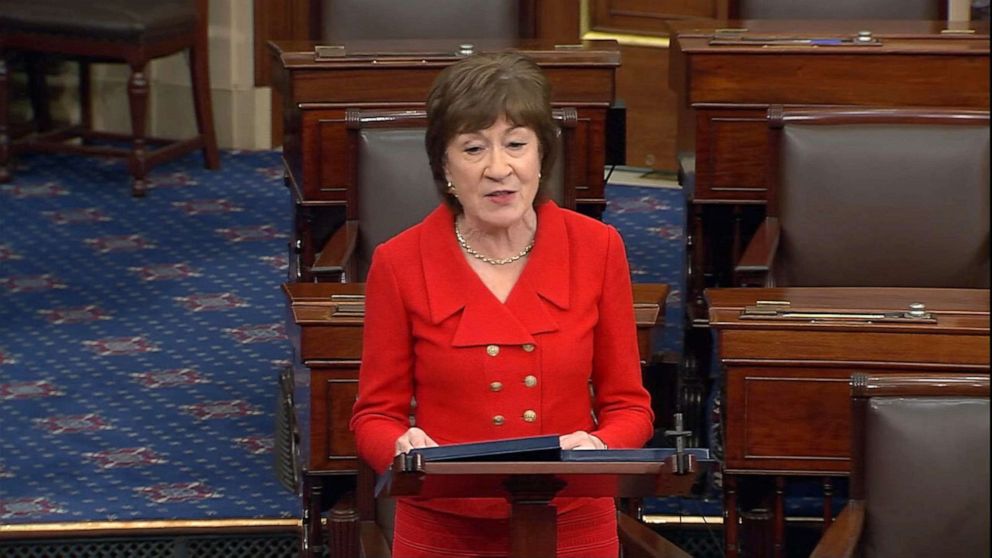 Republicans Lisa Murkowski of Alaska and Susan Collins of Maine have called for Trump’s acquittal — even after raising questions about Trump’s conduct — but also slamming the House impeachment drive as rushed and the Senate’s handling of the trial, including rejecting hearing from witnesses.

“I do not believe that the House has met its burden of showing that the president’s conduct, however flawed, warrants the extreme step of immediate removal from office, nor does the record support the assertion by the House managers that the president must not remain in office one moment longer,” Collins said in her Senate floor speech.

But while she has said his conduct was “wrong,” Trump has continued to insist that his July 25 phone call with Ukraine’s president pressuring Ukraine to investigate the Bidens was “perfect” and that not only has he done nothing wrong, but instead was legitimately fighting corruption.

Sen. Lamar Alexander of Tennessee another Republican Democrats had pinned their hopes on, announced on the Senate floor Wednesday morning that he, too, would vote to acquit the president, saying he can’t be removed from office “simply for actions that are inappropriate” and that it should be up to the people to decide in the next election.

Minority Leader Schumer has argued that the Senate will rue the day it failed, in his view, to hold Trump accountable for his pressure campaign against Ukraine to get an investigation of the Bidens for his personal political benefit.

Majority Leader Mitch McConnell would be the last to speak before the vote.

“We must vote to reject the House abuse of power, vote to protect our institutions, vote to reject new precedents that would reduce the framers’ design to rubble. Vote to keep factional fever from boiling over and scorching our republic. I urge every one of our colleagues to cast the vote on the common good clearly required, vote to acquit the president of these charges,” he said Tuesday.

Once Chief Justice John Roberts announces the vote, the impeachment trial will end, going down in history as the shortest ever.