A team of paleontologists, cave specialists, and park rangers at Mammoth Cave National Park have discovered a trove of fossil treasures that has yielded one of the most diverse Mississippian shark faunas in North America. At least 40 different species of sharks and their relatives have been identified, including 6 new species. Rare preservation of three-dimensional skeletal cartilage documented in Mammoth Cave allows us to understand the anatomy and relationships of these ancient sharks.

The discoveries in remote cave locations in Mammoth Cave National Park were made during an ongoing paleontological resources inventory that began in November 2019. The Inventory goal is to identify the many types of fossils associated with the rock layers exposed outside and within the caves in the park. Several of the caves in the park were known to contain the fossil remains of ice age mammals in unconsolidated deposits and fossils of ancient marine organisms preserved within the limestones in which the caves developed.

The 325 million-year-old fossil-rich limestones of the Mammoth Cave System were formed during the Late Paleozoic, during a time period known to geologists as the Mississippian Period. The park staff reported a few fossil shark teeth exposed in the cave walls of Ste. Genevieve Limestone in several locations. Fossil shark specialist John-Paul (JP) Hodnett of the Maryland-National Capital Parks and Planning Commission was recruited to help identify the shark fossils, which were primarily teeth and fin spines. Since most of the skeleton of sharks is composed of cartilage, rather than bone, the skeletons of sharks are rarely preserved as fossils.

The fossil shark specialist, JP Hodnett, and park staff quickly discovered and identified many different species of primitive sharks from specimens in the rocks lining the cave passages in Mammoth Cave. Hodnett said,

“I am absolutely amazed at the diversity of sharks we see while exploring the passages that make up Mammoth Cave. We can hardly move more than a couple of feet as another tooth or spine is spotted in the cave ceiling or wall. We are seeing a range of different species of chondrichthyans [cartilaginous fish] that fill a variety of ecological niches, from large predators to tiny little sharks that lived amongst the crinoid [sea lily] forest on the seafloor that was their habitat.”

More than 40 different species of fossil sharks and relatives have been identified from Mammoth Cave specimens in the past 10 months and the fossil survey continues. Among this fossil shark assemblage, there appears to be at least six fossil shark species that are new to science. Those species will be described and named in a forthcoming scientific publication.

Most of the shark fossils have been discovered in areas inaccessible to visitors on cave tours, but photographs, artists’ renditions, and three-dimensional models are being prepared for the visitors to view and explore in park exhibits and websites. Jack Wood, who is gathering data for the 3D models, said,

“Since so few people will be able to view these extraordinary fossils in-person, due to the remote and difficult-to-reach locations they are found within the cave, the 3D models will allow the curious public and other scientists to see these rare fossil sharks.”

A new painting showing some of the Mississippian shark and invertebrate fauna from Mammoth Cave has been recently completed by paleoartist Julius Csotonyi and is being premiered here in celebration of National Fossil Day 2020—October 14, 2020. 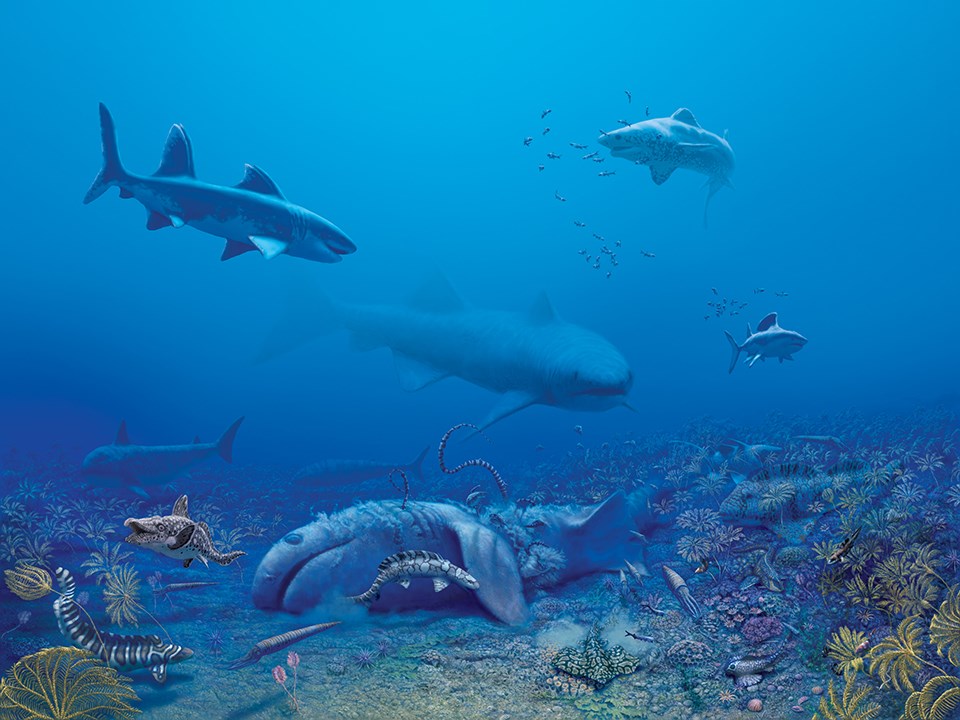 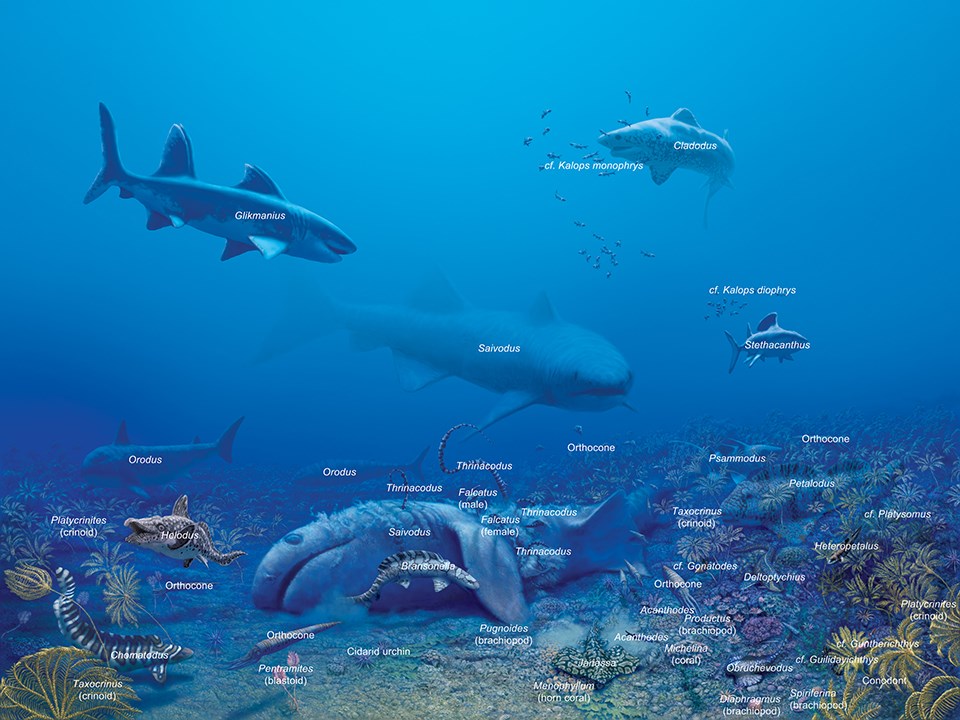