DANVILLE, Ky. (WTVQ) – Danville Police say the body of a bi-racial man found Tuesday matches the description of a man who went missing in Boyle County on Monday.

An initial search of a pond by a dive team on Monday didn’t turn up anything.  Crews returned to the pond at 8:00 a.m. Tuesday.  Danville Police say Kentucky Fish and Wildlife used aquatic cameras to help in the search.  Stanford Fire also provided a Drone for an aerial search over the pond.

No other details were immediately released by Danville Police, including specifically where body was found, the cause and manner of death along with a positive identification.

Search crews were led to the pond on Monday after security camera images from some businesses captured Spicer walking toward the pond on Shannon Way off the Danville Bypass, according to Danville Police.

Police say Avery Spicer’s girlfriend told investigators he may be suicidal.  She told police she spotted her vehicle on Shannon Way off the Danville Bypass just passed Cattleman’s Steak House with some of Spicer’s clothing.

Investigators say they looked at security camera video from businesses that showed Spicer walking toward a pond.

The initial search, which included help from Danville Fire and the Boyle County Sheriff’s Office, did not result in any finding.  A dive team went into the pond and boats were used.  There were also search teams on ATV’s and on foot in the area, according to search crews.  The search is scheduled to resume first thing Tuesday morning.

Spicer is described as bi-racial with a beard.  He was last seen on security camera video around 3:45 p.m. Monday wearing a light green reflective shirt and blue jeans, according to Danville Police.

Anyone with information about his whereabouts is asked to contact Danville Dispatch Center at 859-238-1220.

No picture of Spicer was immediately available. 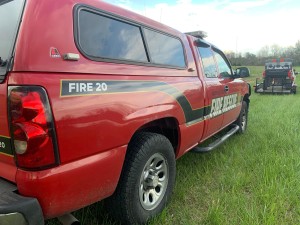