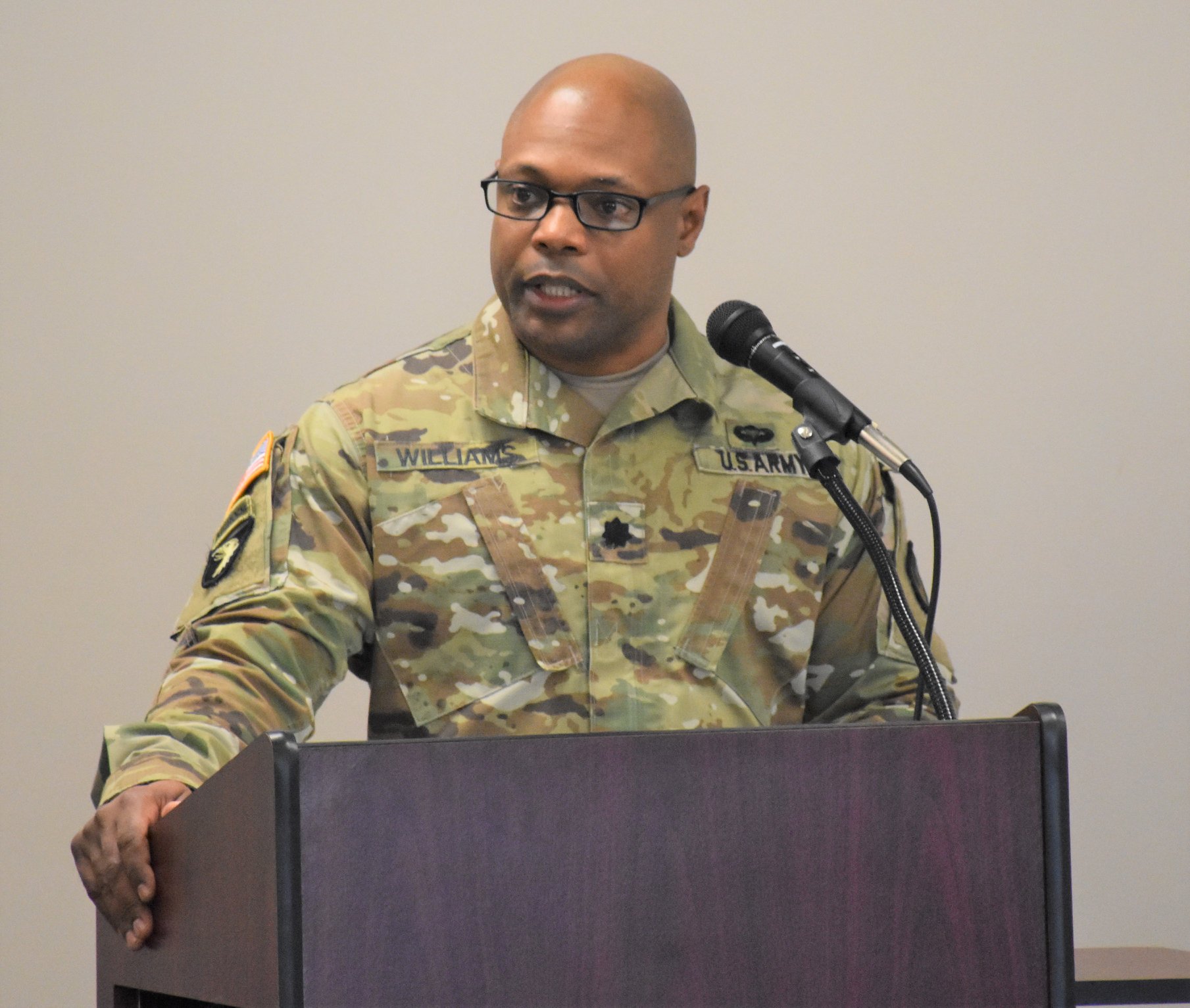 Lt. Col. Edward Williams addresses the audience during the 2020 BGCA change of command.
In his final words to the group, McCutcheon praised the employees’ hard work to support chemical stockpile destruction, especially during a global pandemic and national civil unrest.
“Our priorities during this time have been to protect the workforce, prevent the spread of the virus, and do our part of the worldwide mission while treating each other with dignity and respect. This team has done a great job executing these priorities,” McCutcheon said, according to a release by public affairs specialist Jana Felts.
McCutcheon, who commanded BGCA when the first chemical munitions were shipped for destruction and when the entire stockpile of GB projectiles were destroyed, is joining the 18th Airborne Corps at Fort Bragg, N.C., as its Chemical, Biological, Radiological and Nuclear officer.
A Georgia native, Williams comes to BGCA from Fort Leavenworth, Kansas, where he served as an intermediate-level education instructor. He holds a bachelor of science in environmental studies, a master of science in environmental management, and a master of arts in homeland security.
“I am excited and honored to take command of this organization. I know this team will continue to make history as we support our nation’s commitment to destroy the Blue Grass chemical weapons stockpile,” Williams said.
Col. Kelso C. Horne III, director of the U.S. Army Chemical Materials Activity, presided over the ceremony virtually from Aberdeen Proving Ground, Maryland. He lauded McCutcheon for his accomplishments
.
“Rodney accomplished something no BGCA Commander has ever done – he delivered munitions from the BGCA stockpile to the demil plant for destruction,” Horne said.
“Successful agent destruction operations began on his watch in 2019, a good start for destroying all 520 tons of chemical agent stored on site.”
Horne noted that while maintaining the mission during a pandemic was complicated, McCutcheon’s leadership skills supported both the mission and the work force.
“During the pandemic, confusion and conflicting information became the norm, but not at BGCA,” he added. “Rodney ensured whether teleworking or on the depot, Team BGCA remained safe and protected.”
Horne welcomed the incoming commander, Williams, to the chemical destruction community.
“You are taking on a vital leadership position. BGCA’s mission is crucial to our Nation’s elimination of its chemical weapons stockpile. We are confident in your ability to lead this mission. On behalf of CMA, I welcome you and your family to Kentucky,” he said.
Williams arrives at BGCA as its partners at BGCAPP recently completed destruction of GB projectiles, continue to destroy mustard projectiles and ramp up the main plant for additional destruction operations.
Last week, Project Manager for Assembled Chemical Weapons Alternatives, which oversees BGCAPP, noted that the project reached the halfway point in its mission to destroy the remaining chemical weapons stockpile at BGCA, and in Colorado.
BGCA is charged with the safe, secure and environmentally responsible storage of the chemical weapons stockpile, and supports delivery of chemical munitions to BGCAPP for demilitarization.
Categories: Featured, Local News, News
Tags: Chemical, Destruction, mccutcheon, mustard, Weapons, Williams