A 6-hour concert series and silent auction took place to raise money for the families displaced by a fire.

RICHMOND, Ky. (WTVQ) – In early January, Richmond Police responded to a barricade situation and fire at Richmond Manor Apartments. Three families were displaced by the fire and community members came together to host a benefit to get them back on their feet.

Joan Stone’s daughter and grandchildren had their lives turned upside down when the apartment they’d lived in for eight years was destroyed in a fire.

“Literally like I’ve never lived anywhere except for this house,” says Stone’s granddaughter.

“They lost everything, but they’ve had a lot of help with, people are great,” says Stone. “You know, a lot of good people out there have helped them a lot.”

One of the ways these families are being helped is through a concert and silent auction benefit. In 24 hour, Brandi King says she was able to put together a 6-hour concert series and silent auction to raise money for the three families that lost their homes and belongings.

“One of my friends is one of the ones that was personally in this and the way I look at it, music gives back in so many different ways why not express it by having people come out and listen to some music and forget a bad time,” says King.

After postponing a week because of a winter storm, the community filled the room with smiles and laughter.

“Just to see a community come together like this out here and to see everybody just supporting each other, it gives hope to our country, maybe if it’s just little old Richmond but we’re still giving hope,” says Nicola Cassetta, co-organizer of the benefit’s silent auction.

All of the musicians at Sunday’s benefit from all parts of Kentucky played for free and organizers say 100% of the silent auction proceeds were going straight to the impacted families.

“Everybody’s been willing to donate whatever, and that’s been amazing, that’s a community effort, not just in Richmond but beyond – Central Kentucky, Southeast, and Eastern Kentucky,” says Jessica Blankenship, co-organizer of the benefit’s silent auction.

Stone says there is some beauty in the tragedy, seeing family and friends rally around the three displaced families with love and support.

“They’re slowly getting their lives back together,” says Stone.

If you missed Sunday’s benefit but still would like to donate to these families, please visit the Champions for a Cause Facebook page at the link HERE and reach out to one of the event organizers via phone or Facebook message.

UPDATE: (1/11/22) – The suspect in a fire at a Richmond apartment complex has been arrested. According to the Madison County Detention Center, Logan Browning was arrested and charged after being released from the hospital.

Police say officers responded to the Richmond Manor apartment complex on Sunday for a domestic dispute where Browning barricaded himself in a unit and fired his gun at authorities, leading to a four-hour standoff. Police say Browning then set fire to the building, before trying to escape out the back.

According to the Madison County Detention Center, Browning has been charged with burglary, robbery, arson, along with possession of a handgun by a convicted felon, assault second degree and wanton endangerment, criminal mischief and a parole violation. 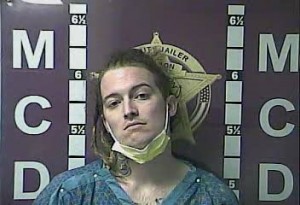 RICHMOND, Ky. (WTVQ) -Some people in Richmond have to find another place to live for now after an apartment building burned over the weekend.

“People I had on the phone were screaming, the apartment’s on fire, it’s on fire, get out now!”

After the Richmond Manor apartment complex was set on fire Saturday after a domestic dispute call gone wrong, many families lost their homes….and are left shaken by the ordeal.

Richmond Police say the fire was an escalation of a domestic dispute that turned into a police standoff with 30-year-old Logan Browning.

Police say Browning broke into his ex girlfriend, Tannor Thompson’s apartment and attacked her before she was able to get away with her kids.

Police say Browning then started firing shots at police before setting the apartment on fire.

“To know it was Logan, it was even worse because he was actually our friend and so was Tannor and he was always a nice guy” said Neighbor and friend, Brittany Trent.

Brittany Trent has been friends with Browning and Thompson for the past three years. Her apartment is adjacent to the building that burned.

She says she and her two kids were told by police to hide in their upstairs bathroom to avoid the gunfire, that it was unsafe to evacuate them.

“I was just scared that we could die or lose all of our stuff, I really didn’t know how to feel, I was just really scared” said Brittany’s daughter Peyton.

Luckily their apartment did not burn and they weren’t hurt, but Trent says police believe one of the bullets fired by Browning went into her apartments outside wall.

“To think that that could possibly be a bullet hole and where we were laying in the bathroom floor upstairs, supposed to be hiding, so we didn’t get hit by a bullet, that’s where it would have exactly went to” added Trent.

She along with other neighbors say the ordeal has left them terrified.

“He took my safety away you know, my home is my safe place and now I don’t even feel safe in my own home” added Trent.

“I’ve been crying ever since, I don’t even want to look at it, it’s a constant memory of what happened” said neighbor, Brianni Chisholm.

But, also feeling relieved…that it’s all over with.

“Now that I know we’re safe and it isn’t going to catch back on fire and it’s done with and were not in danger, is when it hit me. And wow we almost could have burned to death, burned alive in our apartment, or been shot and that doesn’t sit well with me and to know he was supposed to be a friend of ours and he could have had me and my kids burn alive or been shot and killed us for something stupid.”

Browning has been in trouble with the law before.

According to State records, Browning has been on parole since 2019 and was still on parole when the incident happened Saturday….for unrelated charges.

A GoFundMe page has been created to help Browning’s ex-girlfriend Tannor Thompson, you can find a link to donate here.

Donations are also being collected by neighbors and friends to help out the other families displaced by the fire.