LEXINGTON, Ky. (WTVQ/Press Release) – The total volume of real estate sales across the 30-county region that makes up the Lexington-Bluegrass Association of Realtors® (LBAR) broke the $4 billion level for the 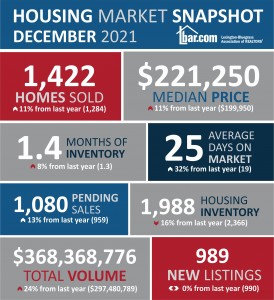 A rise in both housing sales and prices throughout the year helped push total volume to record levels. Residential sales in December hit 1,422, the highest on record for the month, an 11% increase when compared to last year’s total of 1,284. In 2021, every month saw a year-over-year gain in sales except July and 10 out of the 12 months recorded all-time highs.

Single-family home sales increased 12% while townhouse/condo sales waned 1% for the month. Townhouses/condos made up around 6% of the total market in December.

“The past year showed us that home buyers were very active in the market,” said Rusty Underwood, president of LBAR. “People really want to live in this region of the country. The issue we face, and have seen play out for a few years now, is enough inventory to meet the level of demand we are experiencing. And because of this, prices have continued to rise.”

For the year, overall residential prices were up 14%, hitting $225,000 compared to $198,000 the previous year. 2021 was the first year the median home price topped out over $200,000 annually. Of the top 10 most active counties in the LBAR region, all but one saw double digit price growth for the year. In the 12 most active counties for transactions, all saw price increases versus 2020 with 11 of those up double digits for the year. Woodford, Scott, Jessamine, Fayette and Madison were the top five highest priced counties in the region.

“Home sales and prices in 2022 may see some moderation,” stated Underwood. “As consumers start to see mortgage rates rise, housing demand, which has accelerated beyond other market conditions, could have an impact on home prices. We’ve already seen a bump in rates to start the new year, however, experts are saying they should stay below 4% this year and possibly next year as well.”

Pending sales, however, have remained strong throughout the fourth quarter and ended December with 1,080 sales under contract, compared to 959 last year, an increase of 13%. December marked the fifth month in a row with pending sales increases and ended the year up 2% over 2020, making 2021 the highest year on record.

New listings in December broke a three-month trend of increases and fell by less than one percent year-over-year with 989 properties coming online. For the year, however, new listings were up 6% with 18,736 properties for sale versus 17,728 in 2020.

Total housing inventory slumped in the final month of the year, dropping below 2,000 residential properties available for the first time since July. With 1,988 homes on the market in December, inventory levels were down 16% from last year and ended 2021 at a record low, charting a drop in inventory for the year of 37%.

Lawrence Yun, chief economist for the National Association of Realtors®, reported that inventory numbers at the national level hit an all-time low in December. Yun said home builders have already made strides in 2022 to increase supply nationally, but reversing gaps like the ones we’ve seen recently will take years to correct.

Supply of housing inventory, due to the decrease in total inventory, dropped to 1.4-months after sitting at a 1.6-month supply for the previous three months. Compared to last year, the months of supply rose 0.1-months, an increase of 8%.

Last December, homes sold at a record pace of 19 days on average. In 2021, the December days on market jumped to 25 days, an increase of 32%, but matched the November number. December was the first month in 2021 that properties stayed on the market longer than the previous year.

“Locally, we ended the year with a record setting housing market” stated Underwood. “Nationally, the numbers showed a different picture with a significant slow down in December. From what I see in the market already for 2022, the year should be more of the same for real estate in the Bluegrass region.”

Governor says FEMA denying too many requests for assistance