UPDATE (1/27/22) – Several winners were drawn Thursday night in the Rare Bourbon Raffle to help raise money for a new animal shelter in Franklin County. At the close of the raffle, $292,185 was raised which was 97% of the fundraising goal.

23 winners were drawn in total for the 23 prizes. You can listen to the full Facebook Live video HERE.

According to the Franklin County Humane Society, winners will be contacted to arrange prize pick-up. 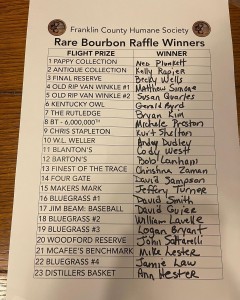 You can purchase a ticket HERE.

“The raffle had over 70 bottles broken down into 20 prize flights when we launched, but this addition from Kentucky’s own Chris Stapleton is very special,” said Bill Klier, organizer for the Rare Bourbon Raffle on behalf of the Humane Society. “You can’t walk into a store and buy this at any price. These limited-edition bottles are only available through charity events like ours. Bottles have sold at auction for as much as $18,000.”

The Franklin County Humane Society is raising money to build a new state-of-the-art animal shelter to replace the outdated shelter that they have been in for over 50 years. The current facility is 200 feet from the Kentucky River and has flooded six times, most recently in Spring 2021.

“We have over $100,000 worth of bourbon and now 21 different prize flights,” said Klier. “We have some really rare and expensive packages, including Pappy Van Winkle, the Buffalo Trace Antique Collection, and the oldest bourbon ever bottled, James Thompson & Brother Final Reserve 45-Year-Old Kentucky Straight Bourbon Whiskey.”

“Since we started the Rare Bourbon Raffle, we have been contacted by several distillers and collectors who, like Chris Stapleton, want to help the animals,” said Klier. “We hope to have other additions to announce shortly!”

Tickets can be purchased HERE.