SOMERSET, Ky. (WTVQ) – A Somerset teenager who was critically injured in a crash July 7, 2021, has died, according to a social media post from her father.

Donnie Whitis made the announcement on Facebook early Friday afternoon that his 19-year old daughter, Carlee Whitis, had passed away at UK Hospital in Lexington.

Investigators say she was airlifted to UK Hospital following the accident on U.S. 27 and KY 70 in Eubank in Pulaski County.

Authorities say she was a passenger in a car driven by her boyfriend, 19-year old Ethan Carter, of Eubank.  He was also airlifted to UK Hospital.

Investigators say Carter was driving a 2016 Honda Accord when he pulled into oncoming traffic at the intersection and collided with a 2008 Chevrolet Uplander minivan that was traveling north on U.S. 27.  The minivan was driven by 28-year old Justin Wilson, of Harrodsburg, according to investigators.  Wilson was treated at the accident scene by Somerset/Pulaski EMS.

When word of the accident hit the community, there was an outpouring of support on social media and visibly in the county.  Businesses and organizations put out signs in support of Whitis and Carter.

On Facebook, Carlee Whitis’ mother, Dana Whitis, promoted a petition on Change.org to put a traffic light at the intersection where the accident happened.

On July 15, 2021, the Kentucky Transportation Cabinet held a meeting in the Eubank community with people calling for a traffic signal to be put in at the intersection.

The transportation officials told the crowd that a Restricted Crossing U-Turn (RCUT) would be the quickest and most logical solution.

The state’s solution didn’t sit well with the frustrated crowd.  Many in the meeting walked out in disgust after the state officials announced the RCUT solution.

Many of the people who remained, interrupted the state officials and complained that their concerns were not being heard.  They also said the state was using outdated statistics and information in making the case for an RCUT instead of a traffic signal.

Under the proposal, the RCUT would be constructed along with right-turn lanes onto KY 70. The state says the completion of the project is scheduled for October 30, 2021. 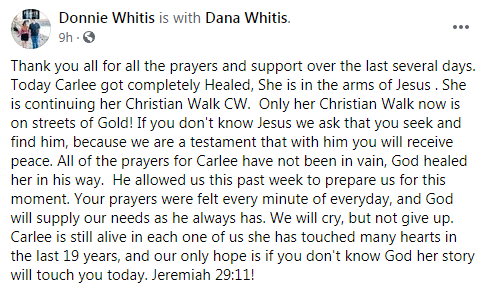 According to the Sheriff’s Office, the accident happened around 5:21 p.m. at the US 27 and KY 70 intersection in North Pulaski County.

Once on the scene, deputies learned that Ethan Carter, 19, of Eubank was driving his 2016 Honda Accord crossing US 27 North from East KY 70. Carlee Whitis, 19, of Somerset was in the passenger seat. Carter pulled in the path of a 2008 Chevrolet Uplander being driven by Justin Wilson, 28, of Harrodsburg. Wilson was traveling North on US 27.