LEXINGTON, Ky. (WTVQ) – Kentucky Lottery officials say a vendor software issue affecting some lottery vending machines has caused tickets for a game sold Sunday and Monday to have erroneous images which were not part of the game.

This has led players to believe they have won prizes – when in fact they have not won or have won a different prize.

The game is Tic Tac Cash, which is part of the Fast Play family of games. Fast Play games are printed at a terminal or vending machine, and work much like a Scratch-off ticket in that a player immediately knows if they have won by matching symbols on the ticket. 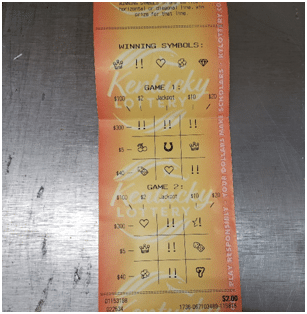 After a software upgrade which took place Sunday morning by game vendor IGT (who holds the contract to manage all terminal-based games for the Kentucky Lottery), close to 500 tickets that were only printed at lottery vending machines contained erroneous images that were not part of the Tic Tac Cash game.

As a result, some tickets appear to have the invalid images match, leading players to believe a variety of prizes have been won.

The tickets when scanned though do show the correct prize amount for that play.

Sales of the game were halted before noon Monday, and a software fix by IGT was put into place later that day in the vending machines affected by the issue.

The state law which governs Kentucky Lottery operations (KRS 154A.110) states, “No prize shall be paid arising from claimed tickets … that are produced or issued in error.”

IGT, however, has proposed a program for players affected by the error. Players who have one of the tickets in question should send an email to help@kylottery.com with details, or call the Kentucky Lottery customer service hotline at 877-789-4532.