VERSAILLES, Ky. (WTVQ) – Acting on a tip from a caller, Versailles Police found the man at the center of a Golden Alert four hours after it was issued.

When he was reported missing and the alert issued, investigators said Warford indicated through a handwritten note that he was suicidal.  Police said he was believed to have had a handgun and had left his cell phone at home.

VERSAILLES, Ky. (WTVQ) – A Golden Alert was issued Friday night for a missing 73-year old Versailles man who police say may be armed and suicidal.

Versailles Police say John “Jay” Warford indicated through a handwritten note that he was suicidal.  Police say he’s believed to be armed with a handgun.  They say he left his cell phone at home.

Police say he was believed to be driving a bronze 1995 Ford F-150 pickup truck.

Anyone with information about his whereabouts is asked to contact Versailles Police at 859-873-3126. 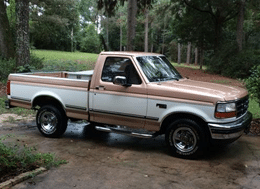 Crews on scene for serious crash in Nicholasville