LEXINGTON, Ky. (WTVQ) – Police have charged a bank robbery suspect in Lexington, who was taken to a hospital after officers used a taser on him. Police say 26-year-old Stephen Conover is charged in Tuesday’s robbery at the Republic Bank on Euclid Avenue.

Police say the robbery happened just before 10:30 a.m. Officers say when they arrived, Conover was seen leaving the bank, allegedly holding a metal object.  According to police, Conover said he had a gun, but officers determined that the object was not a firearm.

Investigators say an officer tazed Conover and he was taken into custody, and transported to a local hospital for TASER-related injuries. Police say Conover is being held at the Fayette County Detention Center, charged with 1st degree robbery. 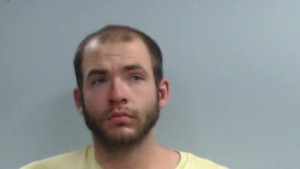 LEXINGTON, Ky. (WTVQ) — A man was arrested Tuesday morning for allegedly attempting to rob a bank on Euclid Avenue.

According to Lexington police, officers responded to Republic Bank on Euclid Avenue for a “hold up” alarm. When they arrived, officers say they saw the suspect leaving the bank and tried to arrest him. Police say they eventually had to taze the suspect to detain him.

The man will be charged with robbery. His name was not released.