Pending home sales exceed properties on market for the month

LEXINGTON, Ky. (WTVQ/Press Release) – One year ago, when the COVID pandemic hit, 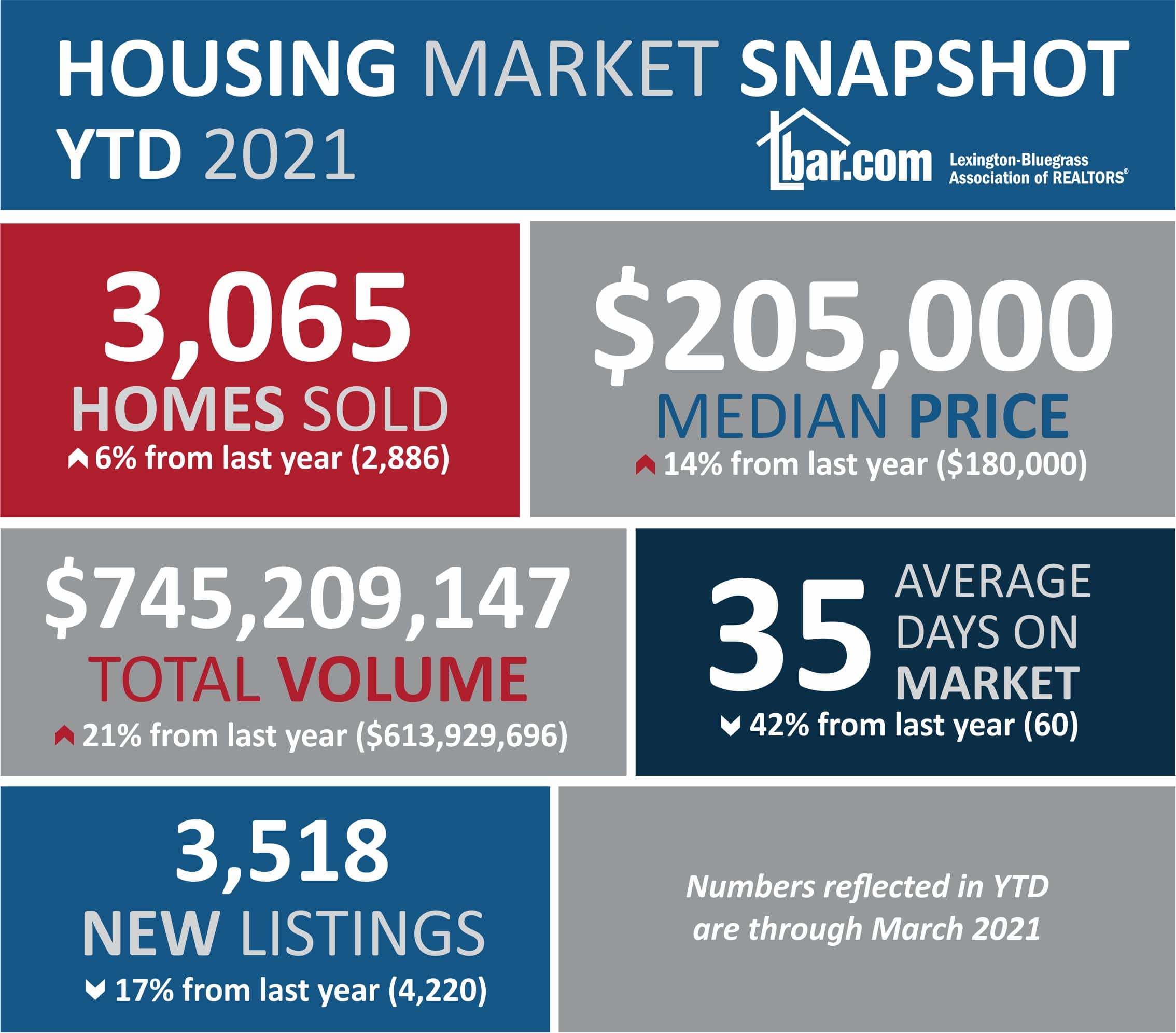 real estate saw a market slowdown in Central and Southeastern Kentucky. This year, the market has hit its stride going into the typical spring season.

“Last year, in the middle of March, property showings had a steep drop off in activity due to the quarantine orders,” said Kristy Gooch, president of the Lexington-Bluegrass Association of REALTORS® (LBAR). “This year, we saw just the opposite. Showings spiked in the second week and continued through the end of the month. Buyers are certainly active in the market.”

Home sales (March 2021 Stats) ended the month up 2 percent, jumping from 1,133 transactions last year to 1,161 in 2021, a new record for the month. Single-family homes increased 4 percent while townhouses/condos declined for the second consecutive month, down 14 percent in March.

New construction sales rallied to the highest monthly total since 2008, ending March with 122 sales, up 4 percent over last year when 117 homes sold. The total was 33 percent higher than the previous month when 92 new homes sold.

Home values in the region have continued to rise, hitting a record high median price of $215,000 for the median. This is a 12 percent jump from a year ago when the median was $191,500. March was the ninth consecutive month of double-digit increases and the 25th straight month of overall price increases year-over-year.

Total dollar volume of home transactions jumped 15 percent in March to an all-time monthly high, with over $294 million for the month, compared to just over $255 million last year.

“Sales in March would have been significantly higher had there been more inventory available,” said Gooch. “The majority of listings that come on the market sell extremely fast. In fact, this is the first time on record that the number of pending listings exceeded the total number of active homes on the market.”

Pending sales increased in March for the first time this year, ending the month with 1,357 transactions under contract, a 3 percent uptick from last year when 1,316 homes were pending. Compared to the previous month, pending sales in March were up 38 percent.

Inventory in March has now dropped for 16 consecutive months of record lows, ending the month with 1,177 residential properties for sale. This represents a decrease of 60 percent compared to last year’s inventory total of 2,958.

The March total was down almost 9 percent when compared to last month’s previous record low mark of 1,286 homes for sale. March was the eighth straight month of inventory levels being under the 2,000 mark.

With the lack of available properties for sale, the months of inventory took a steep dive to a new all-time low, reaching just one month in March, a decrease of 62 percent from last year when it was 2.6 months.

A balanced market is generally defined as six months of housing supply. For the entire 26-county jurisdiction, months of inventory for homes in categories between $100,000 and $300,000 were all under one month, with homes priced between $180,000 and $200,000 standing at just over a week of available inventory.

New listings didn’t seem to help the inventory crunch as they fell 7 percent for the month, dropping from 1,547 last year in March to 1,442 this year. However, new listings grew by 51 percent from February and was the highest number of new listings to come on market since October 2020.

“Going into the second quarter, with interest rates remaining very low, buyer demand through the roof and businesses starting to open back up at a more rapid pace, we should see an extremely hectic market for several months,” stated Gooch. “Home values continue to rise so many sellers who list their properties should see a nice return on their investment when they sell. And the market could use an infusion of properties to satisfy the demand that exists.”

Days on market in March hit a monthly low by falling 39 percent over last year. With homes selling at 36 days, versus 59 in 2020, the total follows the previous five months as being the only months with a faster pace of selling.

Gooch continued, “Last spring, starting in April, the pandemic started to affect the real estate market with consumer uncertainty that eventually led to many aspects of the economy shutting down. I would expect to see a flurry of activity as people start getting back to a sense of normalcy after making adjustments for an entire year.”