UPDATE: Hundreds gather during Peace Vigil for Ukraine in Lexington

UPDATE (3/2/22) – Hundreds gathered in downtown Lexington on Wednesday evening to show support for Ukraine. The Peace Vigil for Ukraine was organized by the Mayor’s International Affairs Advisory Commission.

“The attack on Ukraine is so difficult to watch, and even here in Lexington we want to show our support for those living in the country,” said Mayor Linda Gorton earlier this week.

Some people brought signs as a show of support for Ukraine. Others, brought Ukrainian flags and waved them.

We’ll have more from the vigil tonight at 11 on ABC 36 News. 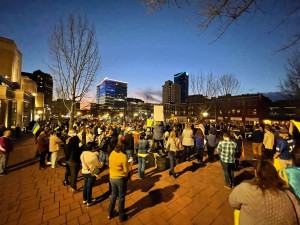 LEXINGTON, Ky. (WTVQ) – The Peace Vigil for Ukraine is scheduled to take place Wednesday, March 2 at 6 p.m. at Courthouse Plaza.

“The world is coming together in support of Ukraine, as they fight to defend freedom and democracy,” said Mayor Linda Gorton. “The attack on Ukraine is so difficult to watch, and even here in Lexington we want to show our support for those living in the country.”

“I think it is extremely important we support our international residents living here in Lexington,” said Reynolds. “When one of our European delegates to the Commission expressed concern for the trauma the Ukrainian and European communities are facing, the group agreed to do something to bring people together, and show our deep concern for what is happening in Ukraine. It is easy to feel helpless, and coming together can seem like a small act of solidarity, but in a time of crisis, it’s an opportunity to start somewhere.”

According to the city, the Peace Vigil will include participation from members of the Lexington region’s Ukrainian community, as well as interfaith leaders. In addition, Commission members are encouraging residents to display support for peace in Ukraine by lighting and decorating their homes in blue and yellow.

According to Mayor Gorton, the city will also show its’ support from March 1-5, by lighting up downtown in blue and yellow for the colors of the Ukrainian flag. LexPark will light the Helix Garage, as well as two downtown pedways. City Center will also light their building in blue and yellow.

The Mayor’s International Affairs Advisory Commission will host the Peace Vigil on Wednesday, March 2 at Courthouse Plaza at 120 North Limestone Street at 6 p.m.

“Let’s join together in support of peace in Ukraine as millions around the world are doing,” said Mayor Gorton.