The department is investigating posts about a white truck trying to give young girls a ride to school.

The incident was reported to police first and then was posted to Facebook.

Since then, more people have been posting about sightings of a suspicious white truck in the Bell Place area and City/County Park.

Sgt. Grimes says people are posting before they are reaching out to police. Grimes says there’s usually three people in the department who monitor social media, but it isn’t their only job. In some cases, officers will see a post hours later.

“A lot of times it makes us play catch up,” said Sgt. Kevin Grimes.

Sgt. Grimes says social media is a tool but if you see something the best thing to do is call the department.

“We would much rather show up to a situation and it be nothing, totally innocent or misunderstood than to not show up at all and have missed out on a crime,” said Grimes.

Police say they still have nothing on the white truck. They’re waiting for more detailed information. 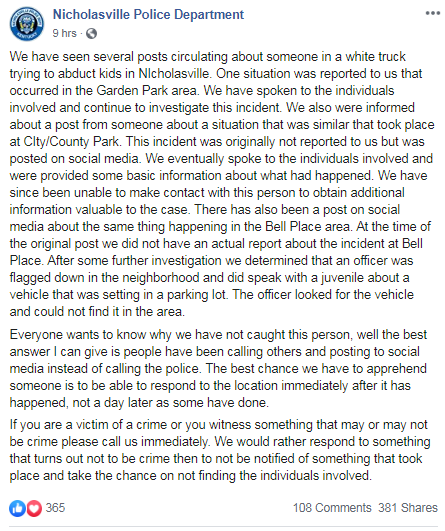