Editor’s Note: Shelby Stills of the The Kentucky Teacher magazine is profiling new school superintendents across the state. The first two in the series look at the new superintendents in Mercer and Woodford counties, both of whom are familiar faces among Eastern Kentucky educators.

MERCER/WOODFORD COUNTIES, Ky. (Kentucky Today) – Tragedy shaped Jason Booher’s approach as an educator. As a survivor of the Carrollton bus crash, the nation’s worst drunken driving accident, the new Mercer County superintendent has devoted his life to helping others.

“After seeing what those educators did for me for those four years after the bus crash, I wanted to give back to young people and give them what those coaches and teachers gave to me,” he said.

Booher will start his new job in Mercer County on Aug. 1, replacing superintendent Dennis Davis, who is retiring.

He said he found his passion through being an educator, and the crash made him a better one.

He frequently speaks to students about the dangers of drunk driving, hoping to protect them from what he went through. He has a huge heart for helping children, and has been given the opportunity to learn about those who are most at-risk: children who remind him of himself all those years ago.

“I want to give these kids a chance to be successful and show them that they can be successful, regardless of their home life or past experiences,” said Booher.

He said his main goal going into the new school year is to “learn about Mercer County, the community, the school and their needs.”

He said he plans to work hard to ensure his students get back on track after the shutdowns due to COVID-19, and is looking forward to bringing positive change to Mercer County. He hopes he can make a difference in students’ lives, giving them the tools they need to be successful.

Booher has been principal at Pikeville High School (Pikeville Independent) since 2018. He previously served as assistant principal and athletic director from 2014 to 2018.

Prior to his time in Pikeville, Booher made a stop at Belfry High School (Pike County), and served as the head basketball coach at Shelby Valley High School (Pike County) from 2004 to 2010, where he led the school to a State Title in 2010. Shelby Valley is the only boys basketball team in state history to win the All “A” the State Championship and the Sweet 16 Championship in the same season.

Following his stretch at Shelby Valley, he served as assistant principal at Holmes High School (Covington Independent) from 2010 to 2014, where he led the Bulldogs to the 9th Region Championship in 2013.

He holds a bachelor’s in education from the University of Kentucky, and a master’s and Rank I certificate, along with superintendent, director of pupil personnel, and instructional supervisor certifications, from Morehead State University.

Throughout his career, Booher said one thing has stayed the same – the support from his family.

His wife Hilary and two children, Harrison and Jewel, have stood behind him through every challenge and triumph.

He said he and his family love to travel when they can, and are enjoying their time together before Harrison and Jewel both go off to college in the fall. Booher said he and Harrison love to do what they call “run-cations,” which consist of running a marathon and sightseeing for a day or two.

Meanwhile, on July 1, Danny Adkins started his new job as superintendent in Woodford 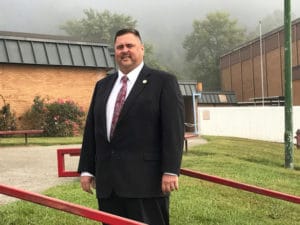 County. He succeeds Scott Hawkins, who retired at the end of June after 13 years. Adkins has served as Floyd County superintendent since 2018.

Adkins has been an educator for more than 25 years and has served in various roles, including bus driver, coach and teacher before moving into an administrative role. He began his teaching career at Millard School (Pike County) and taught middle and high school science for nearly 20 years. In 2014, he became principal of Kimper Elementary School (Pike County).

Being from Eastern Kentucky, Adkins understands the effects poverty can have on students.

“Being an educator means providing opportunities and hope,” he said.

Adkins said he is grateful for the opportunity to lead the Woodford County schools and is excited to get to work. His primary goal this year is to help students get back on track after the COVID-19 pandemic.

“These kids have been out of school for a year and a half, let’s help them fall back in love with school. If we can do that, we can help them get back on track and help fill the void and cracks that have been created by the pandemic,” he said.

As for his education philosophy, Adkins stressed the importance of career readiness. Whether that leads to college, trade school or an internship, Adkins said, “I want my students to be able to define their own success.”

Adkins received his bachelor’s and master’s degrees from Morehead State University. He achieved his Rank I certification through Union College in Barbourville and his School Superintendent Certification at the University of the Cumberlands in Williamsburg.

Outside of school, he said he enjoys spending time on the water, traveling and attending sporting events with his wife, Cindy, and two kids, Emily and Joshua.

Judge appears willing to unveil some of Mar-a-Lago affidavit