NANCY, Ky. (WTVQ)  – At a signing ceremony Tuesday in the U.S. Capitol, U.S. Secretary of 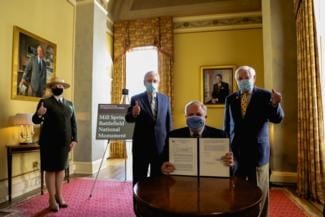 Mill Springs was the site of the first major victory for the Union Army during the Civil War.

Battlefield land for the new national monument was acquired through donations from the Mill Springs Battlefield Association and Pulaski County, Kentucky.

“In Kentucky, Union forces took their first steps toward winning the Civil War and ending slavery in the United States. I’m proud Mill Springs Battlefield and our Commonwealth’s contributions to the cause of liberty are receiving national recognition,” said McConnell. “Building on the progress of the Battlefield Association, Congressman Hal Rogers and I introduced and led to enactment a measure to preserve Mill Spring’s place in American history. I’m grateful for Secretary Bernhardt’s support to protect this national monument, and I gladly welcomed him and my good friend Congressman Rogers to my U.S. Capitol office for the official signing ceremony.”

“We have worked with this driven local community for many years—since some of my first days in Congress–to preserve the Mill Springs Battlefield piece-by-piece. Today’s signing fulfills a long-time dream of the members of the Mill Springs Battlefield Association and so many in southern Kentucky who have worked tirelessly to ensure that this hallowed ground becomes a well-known piece of American history,” added Rogers. “Adding Mills Springs, the site of the first major Union victory in the Civil War, to the National Park System is another victory for those who paid the ultimate sacrifice on this battlefield for a stronger union.”

“Bringing Mill Springs Battlefield National Monument into our family of Civil War battlefields deepens and enriches our understanding of this important chapter in our nation’s history. Like all of our parks and public lands, America’s battlefields provide a place for quiet reflection for many who visit and learn from them,” said Margaret Everson, who is exercising the delegable authority of the director of the National Park Service. “We are grateful to all of the partners that supported this effort and to Senate Majority Leader Mitch McConnell for his vision that helped make this happen.”

Mill Springs Battlefield memorializes the Union’s victory on Jan. 19, 1862, which led to the collapse of the eastern sector of the Confederate Army’s defense of the Upper South.

The Battle of Mill Springs helped to maintain Kentucky’s Union affiliation throughout the war and offered more than a strategic victory for the Union Army. It served as a national rallying call heralded by the Union and provided a much-needed boost to morale, helping to re-energize Northern war interests.

Among other features, Mill Springs Battlefield National Monument preserves Zollicoffer Park, the centerpiece of the core battlefield area, which was conveyed by Pulaski County to the NPS.

Zollicoffer Park is named for Confederate General Felix K. Zollicoffer, a former U.S. Congressman who was killed in action at Mill Springs in the failed attempt to secure Kentucky for the Confederacy.

Zollicoffer Park is the site of the famed “Zollie Tree,” sown from the original white oak tree where the body of Zollicoffer was placed after he was shot during the battle.

The visitor center and Zollicoffer Park were previously managed by Mill Springs Battlefield Association with support from Pulaski County and are currently open to the public. During the initial transition of management and operations, the NPS, Mill Springs Battlefield Association and Pulaski County will partner to provide visitor information and manage park resources.

The new national monument was authorized by the John D. Dingell Jr. Conservation, Management, and Recreation Act of 2019.