McConnell’s remarks, his first public comments since Biden was declared the winner of the presidential election, come as Trump’s allies on Capitol Hill have been reluctant to congratulate Biden or push the president to accept the outcome.

McConnell said the process will play out and “reach its conclusion.”

Trump has declined to concede the presidential race and is mounting legal fights, but there has been no indication or evidence of voter irregularities or widespread fraud in the election.

“Our institutions are actually built for this,” McConnell said as he opened the Senate. “We have the system in place to consider concerns and President Trump is 100% within his rights to look into allegations of irregularities and weigh his legal options.”

Senate Democratic leader Chuck Schumer said the Republicans’ refusal to stand by the election results is “extremely dangerous, extremely poisonous to our democracy.”

Schumer said election lawsuits can be valid but they must be based in evidence and facts.

Cameron and the nine other state AGs joining the lawsuit over some of Pennsylvania’s mail-in voting rules.

The brief filed Monday afternoon by the group argues Pennsylvania’s Supreme Court should not have extended the deadline for the ballots, saying it could increase the risk of fraud. 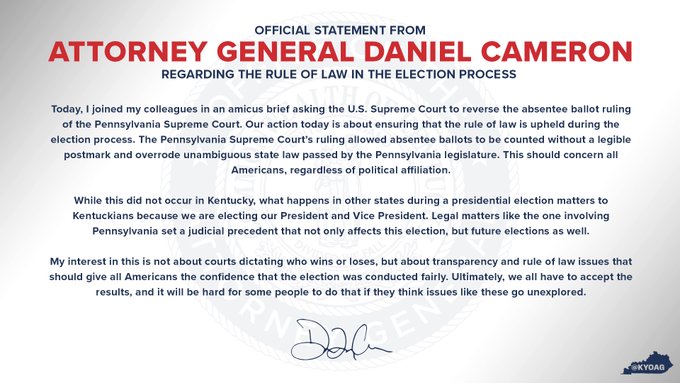 The documentation lists several cases of mail-in fraud of the years, although they don’t list any instances that happened during this election.

Cameron tweeted in a statement: “My interest in this is not about courts dictating who wins or loses, but about transparency and rule of law issues that should give all Americans the confidence that the election was conducted fairly,” it reads.

The U.S. Supreme Court declined to review a similar case over Pennsylvania rules before the election. The secretary of state said they have been separating the ballots in question in case the justices rule they cannot count them.

When asked about McConnell’s and Cameron’s actions and remarks, Beshear was mostly critical of Cameron using state tax dollars.

“I have a real concern using Kentucky tax dollars, Kentucky lawyers for challenging an election in another state that we didn’t have anything to do with,” Beshear said.

BELOW ARE MCCONNELL’S FULL REMARKS TO THE SENATE MONDAY

“Last week, record numbers of Americans exercised the right which generations risked everything to hand on to us.

“I want to spend a few minutes this morning talking about what we saw last week, where we are now, and where our great country will go from here.

“There is one aspect of last week that has gotten lost that I want to single out at the start.

“By every indication, the 2020 election appears to have been free from meaningful foreign interference. There is no suggestion that our foreign adversaries were allowed to undermine the integrity of this process.

“According to the Director of the Cybersecurity and Infrastructure Security Administration, ‘we have no evidence any foreign adversary was capable of preventing Americans from voting or changing vote tallies.’

“And General Paul Nakasone, the head of the NSA and U.S. Cyber Command, reported Tuesday night, quote, ‘the actions we’ve taken against adversaries… have ensured they’re not going to interfere in our elections.’

“The Trump Administration and the Senate spent four years supporting the state and local election authorities on the front lines.

“The absence of any reports of foreign interference is a ringing endorsement of our bipartisan work. And it slams the door on the embarrassing, irresponsible rhetoric that some Washington Democrats spent four years broadcasting.

“Too many voices tried to talk down our progress, urged Americans not to have confidence, and smeared anyone as unpatriotic who opposed far-left proposals to rewrite election laws.

“Well, the people who pushed this hysteria could not have more egg on their face than they do now.

“None of their demands became law. The Speaker of the House did not get to personally rewrite election law.

“And yet, because of the sensible bipartisan steps that some of us championed, our defenses and countermeasures proved to be in radically better shape than in 2016.

“So let’s talk about where we are now.

“According to preliminary results, voters across the nation elected and re-elected Republican Senators to a degree that stunned prognosticators.

“Likewise, the American people seem to have reacted to House Democrats’ radicalism and obstruction by shrinking the Speaker’s majority and electing more Republicans there.

“And then there is the presidential race.

“Obviously, no states have yet certified their election results. We have at least one or two states that are already on track for a recount. And I believe the President may have legal challenges underway in at least five states.

“The core principle here is not complicated. In the United States of America, all legal ballots must be counted; any illegal ballots must not be; the process should be transparent or observable by all sides, and the courts are here to work through concerns.

“Our institutions are built for this. We have the system in place to consider concerns. And President Trump is 100% within his rights to look into allegations of irregularities and weigh his legal options.

“Twenty years ago, when Florida came down to a very thin margin, we saw Vice President Gore exhaust the legal system and wait to concede until December.

“More recently, weeks after the media had “called” President Bush’s re-election in 2004, Democrats baselessly disputed Ohio’s electors and delayed the process in Congress.

“The 2016 election saw recounts or legal challenges in several states.

“If any major irregularities occurred this time, of a magnitude that would affect the outcome, then every single American should want them to be brought to light. And if Democrats feel confident they have not occurred, they should have no reason to fear any extra scrutiny.

“We have the tools and institutions we need to address any concerns. The President has every right to look into allegations and request recounts under law.

“And notably the Constitution gives no role in this process to wealthy media corporations.

“The projections and commentary of the press do not get veto power over the legal rights of any citizen, including the President.

“More broadly, let’s have no lectures about how the President should immediately, cheerfully accept preliminary election results from the same characters who just spent four years refusing to accept the validity of the last election.

“And who insinuated this one would be illegitimate, too, if they lost again.

“Let’s have no lectures on this subject from that contingent.

“In late August, Secretary Hillary Clinton said, quote, ‘Joe Biden should not concede under any circumstances… I think this is going to drag out, and… he will win if we don’t give an inch.’

“That same month, Speaker Pelosi and the Democratic Leader both stated, quote, ‘[President Trump] needs to cheat to win.’

“In October, when Speaker Pelosi was shopping some conspiracy theory about the Postal Service, she recklessly said, quote, ‘I have no doubt that the president… will lie, cheat, and steal, to win this election.’

“Does this sound like a chorus that has any credibility to say a few legal challenges from President Trump represent some kind of crisis?

“At this time last week, small-business owners in cities across America were boarding up their windows in case President Trump appeared to win and far-left mobs decided to reprise their summertime rioting.

“Suffice to say a few legal inquiries from the President do not exactly spell the end of the Republic.

“Quote: ‘For centuries, we have asked people who are unhappy with their fellow citizens or government agencies and institutions to bring their claims to court.’

“President Trump’s is ‘a traditional response that affirms rather than undermines American institutions.’ End quote.

“This process will reach its resolution. Our system will resolve any recounts or litigation. In January, the winner of this election will place his hand on a Bible.

“But we also know that we will wake up on January 21st, still blessed to live in the greatest nation the world has ever seen.

“And in no small part that is because we respect the rule of law, we trust our institutions, and neither of those things is outweighed by pronouncements from partisans or the press.”